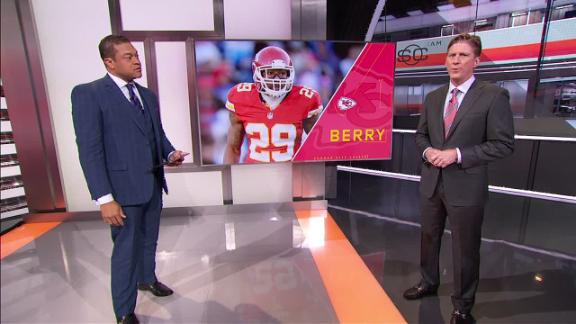 Eric Berry and the Kansas City Chiefs will not reach a long-term deal prior to Friday's deadline to extend his contract off his franchise tag, sources told ESPN's Adam Caplan.

There is a 4 p.m. ET deadline for designated franchise players to sign long-term contracts. The NFL Network first reported that no long-term deal would be reached.

Berry, 27, received the Chiefs' non-exclusive franchise tag (worth $10,806,000) on March 1. If he doesn't sign, he would be allowed to negotiate with other teams, but any club that would sign him would have to surrender two first-round picks to Kansas City.

As he hadn't signed the tender, Berry stayed away from the Chiefs' offseason activities and didn't participate in the team's minicamp. He has said he hoped to reach agreement on a long-term contract with the Chiefs.

This is the second consecutive year the Chiefs have gone down to the July 15 deadline with a franchised player. Last year on deadline day, Kansas City and linebacker Justin Houston agreed to a six-year, $101 million deal that included $52.5 million guaranteed.

Berry capped a remarkable 2015 season by being named NFL Comeback Player of the Year by the The Associated Press.

He was diagnosed in November 2014 with Hodgkin lymphoma, shortly after complaining of tightness in his chest after a game against the Oakland Raiders.

Berry, buoyed by his conditioning sessions even through his chemotherapy treatments, was cleared to return to football by both personal physicians and team doctors shortly before the start of training camp last summer.

Things progressed in stages from there. Berry quickly was allowed to participate in contact drills, earned his starting spot back and -- over the last several games of the season -- played as well as he had at any time before his illness.

Berry finished third on the Chiefs in tackles and had two interceptions. After the season he played in the fourth Pro Bowl of his six-year NFL career.

Berry joined the Chiefs as a first-round draft pick in 2010 from Tennessee.