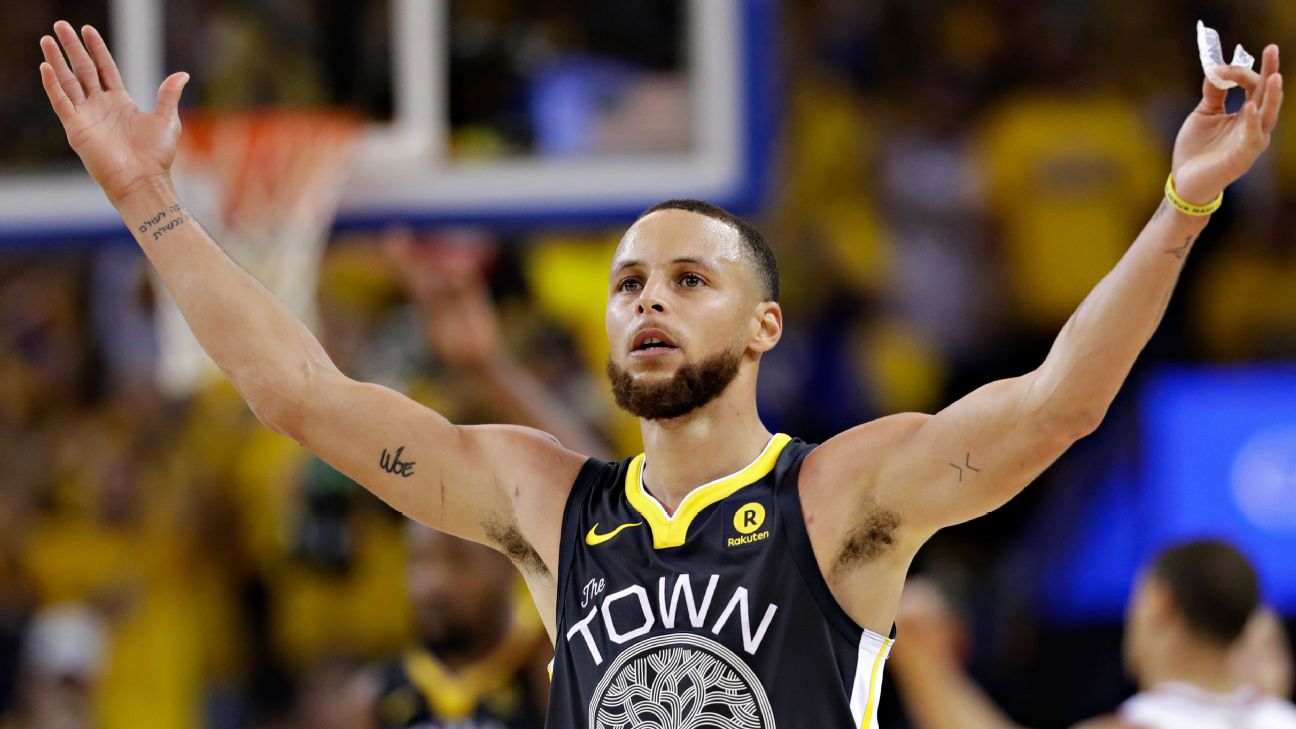 OAKLAND, Calif. -- After escaping by the good graces of the basketball gods with an overtime victory in Game 1, the Golden State Warriors rediscovered their best rhythm in a 122-103 win over the Cleveland Cavaliers in Game 2 of the NBA Finals.

Any short-term concerns about Klay Thompson, who came into the game nursing a high sprain of his left ankle suffered on Thursday night, were largely extinguished early. He buzzed along the perimeter with his usual flow, appeared his typically sturdy self on the defensive end and drained a pull-up 3-pointer on a one-on-three break in the third quarter.

Thompson finished with 20 points on 8-for-13 shooting from the field. Such is the miracle of modern medicine.

Golden State frequently overwhelms opponents with a relentless downpour of buckets just after halftime. In Game 2, that storm arrived a bit late, but it was timely nonetheless. In less than one minute in the beginning of the fourth quarter, Stephen Curry answered a LeBron James 3-pointer with two of his own, extending a seven-point Warriors lead to 13.

Game 2 wasn't Curry's most efficient outing (33 points on 11-for-26 shooting from the field) as he targeted Kevin Love as a mismatch. But he converted a Finals-record nine of his 17 attempts from the 3-point line, including an off-balance heave at the shot-clock buzzer with just under eight minutes remaining. His four-point play less than two minutes later stretched the Golden State lead to 16 points midway through the fourth quarter.

Kevin Durant came into Sunday night having shot better than 50 percent from the floor in only one of his past six games. In Game 2, he hummed with a 10-for-14 night from the field for 26 points, along with nine rebounds and, impressively, seven assists. Rather than settle in his isolation possessions, Durant looked to make plays when he encountered resistance in the half court.

Cleveland deployed its preferred offensive strategy of having LeBron challenge Curry and various Warriors big men in pick-and-roll situations. A Golden State defense that was uncharacteristically undisciplined in Game 1 made better decisions in response, particularly from the help side. At times, the Warriors trapped James, forcing the ball from his hands.

James, whose left eye was bloodshot on Sunday after being poked by Draymond Green in Game 1, spent much of the night as a facilitator, hurting the Warriors with pinpoint passes from the high post. He scored 29 points, collected nine rebounds and made 13 assists. Had his Cavaliers teammates converted more of their large selection of open looks, James might have had more.

The Warriors made an adjustment to their lineup, opting to start JaVale McGee at center in place of Kevon Looney. Though LeBron willfully placed the gangly 7-footer on an island, McGee survived the attacks. On the offensive end, McGee was a revelation as both a dive man and custodian in the Warriors' offense. In 18 minutes, he scored 12 points on perfect 6-for-6 shooting (five dunks and a nifty hook shot from eight feet), without turning the ball over.

After a first game with some hotly debated calls, the officiating was under great scrutiny on Sunday evening. The most notable moment came in the third quarter after Curry tumbled into James on the break, forcing James out of bounds. The no-call generated fierce protest from James and the entire Cleveland bench, and coach Tyronn Lue, who received only a single technical foul during the regular season, was assessed one.

And what's high-grade postseason basketball without a little humor? The fans in Oakland obliged by facetiously offering their gratitude for JR Smith's snafu at the end of regulation of Game 1. They gave Smith an ovation during player introductions, then serenaded him at the foul line in the first quarter with chants of M-V-P.

It was yet another late spring night in Oakland, where the Warriors played their opponent to a laugh track.

Curry shines as Warriors head to Cleveland up 2-0
Steph Curry puts on a show by setting a Finals 3s record with nine triples as the Warriors cruise past the Cavaliers 122-103.

Curry cooks Cavs, Warriors go up 2-0
Steph Curry comes alive in the second half, finishing with 9 3-pointers and sends the series back to Cleveland with the Warriors up 2-0.