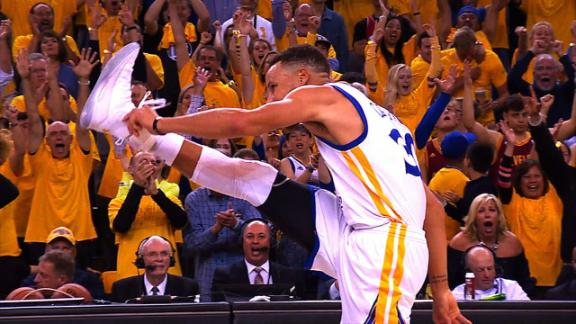 Though Stephen Curry won't be playing tonight on his 30th birthday, he's still using the day to introduce his latest signature sneaker, the Under Armour Curry 5.

The No. 30 holds added meaning in the Curry household, of course, as the longtime family jersey number of Dell, Stephen and Seth, and a favorite among a new generation of aspiring players who've looked to follow Curry's MVP-level play.

As Curry mentioned at the start of his ninth season earlier this fall, his birthday comes at a time when he's also hoping to embark on the second half of his career in the NBA.

"When I came in the league, that's the only thing I did say -- I want to play 16 years just because my dad did," Curry told the Charlotte Observer. "I've always had an appreciation of what that meant."

In advance of the milestone, the starting point for Curry's fifth sneaker plays off of his March 14 birth date, its Pi Day association and, naturally, his mathematical achievements on the court. "Squaring the circle," a longtime complex geometric challenge thought to be nearly impossible by scholars, provides the design inspiration for both the upper and bottom of the shoe, with sharp angles and rounded curves blending together atop the Curry 5.

The phrase is often used as a metaphor for achieving the impossible -- as the brand sees it, that has been the story for Curry's trajectory to the heights of the game over the past decade as the league's first ever unanimous MVP.

A large open circle seen through the middle of the shoe defines the look, as the design flows around to the toe panel, where a hidden symbol is revealed and woven into the knit material. Along the outsole, a more literal "squaring of the circle" graphic is found at the forefoot of the shoe, Curry's first point of contact as he's cutting along the court. The sharply sculpted midsole features a flat ridge toward the toe, offering up some real estate for Curry's career-long pregame "I Can Do All Things ..." hand-scribed ritual.

While signature sneakers rarely launch in March, often dropping instead at the start of the season, Under Armour is looking to shift its release calendar with a series of unpredictable unveils for Curry's models going forward. Following up last season's surprise debut of the Curry 4 at the NBA Finals, Curry's birthday served as the debut platform this time around.

To honor the occasion, Under Armour is releasing 314 pairs of a limited edition "Pi Day" colorway, featuring "3.14.18" along the lace tips and a repeating pattern of the transcendental number seen through the clear bottom.

The shoe's black base color draws its inspiration from a black diamond, meant to serve as a symbol of refinement, and also the modern stone for a 13th anniversary. The metallic iron midsole shade celebrates Curry's "forged skillset," according to the brand, and all of the work he's famously dedicated to his craft over the past 30 years.