'Winning changes everything': How the Giants earned keeping Madison Bumgarner 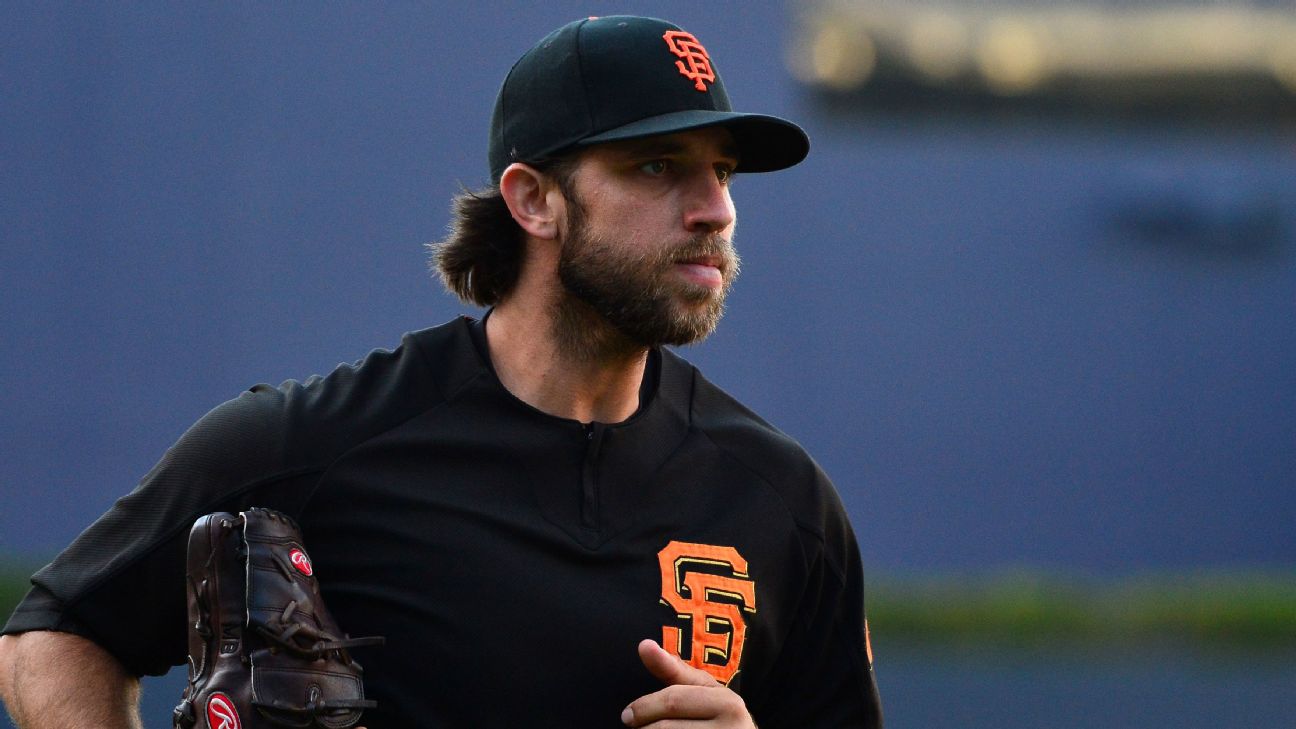 The scene was familiar to fans of the San Francisco Giants. Madison Bumgarner was on the mound. Behind him, Brandon Belt was at first base, and Brandon Crawford at shortstop. They blew an early lead, but Pablo Sandoval got things going in the seventh, and they would rally for six runs in the 10th inning to beat the Mets 9-3 for Bruce Bochy's 1,000th win as the Giants' manager.

But after players and staff members toasted Bochy's milestone in the visiting clubhouse at Citi Field, there was very little else to celebrate. San Francisco had finished May losing nine of its last 11 games; by June 27 the Giants were a season-high 12 games under .500, dropping 20 games behind the division-leading Dodgers.

After a 98-loss season in 2017, on pace to win just 70 games this year, it looked like the time had come to wave the white flag. Farhan Zaidi, the new president of baseball operations, had all the leeway he needed to turn the page and reshape the future of the franchise. Reliever Will Smith had emerged as one of the most sought-after trade chips, joining MadBum, who was finally healthy and predictably was one of the pitchers most coveted by teams angling to make a playoff run.

These Giants refused to play by those rules. After losing to the Diamondbacks on June 29, they won 18 of their next 21 games, the best record in the majors during that stretch. A productive lineup and an elite bullpen have pushed the Giants to within 2 games of an NL wild-card slot.

Asked about the Giants' reversal of fortune, Bumgarner was philosophical. "I've tried to figure that stuff out, and I know with this game there is one thing I know for sure: Once you think you've got something figured out, you're wrong," he said. "It was just like somebody flipped a switch and it all started changing. If there is something to it, I don't know what it is.

"I don't remember a time where we won that we were expected to win. And I would rather be that way," Bumgarner added, referring to both their incredible recent run and their World Series wins in 2010, 2012 and 2014. "I would rather be an underdog-type of team that has a chip on their shoulder, playing with an edge, than somebody that is supposed to run away with it."

The Giants weren't supposed to be in this position again, of mattering again. Yet, by the time Bumgarner took the mound against the Cubs at Oracle Park last Saturday, the standing ovations he was showered with at the end of the sixth and seventh innings had as much to do with his spinning a strong start against a tough lineup as it did with fans saying goodbye because it might have been the last time he played in a Giants uniform at home.

But it won't be the last time. If 2019 was supposed to be the closing episode of the most successful chapter in the storied franchise history, this year's Giants instead earned for themselves the right to keep MadBum and make another long-shot run at October.

"It's tough, and it isn't, to quiet those [trade] rumors," Bumgarner said. "Winning changes everything."

The Giants' current run is a reminder of what the franchise has accomplished, especially with a core of players who have been there before.

Alongside Bumgarner and Sandoval, Buster Posey's steady clubhouse presence is a constant reminder of the Giants' glorious recent history. And while for others it may seem like a distant memory, Bochy knows better than to underestimate his "Fab Five."

"They have championship blood in them, and they show it, and it starts with these core guys," Bochy said, adding Belt and Crawford to the mix for their roles on the 2012 and 2014 title-winning teams. "We're fortunate that we still have our core here, and that brings stability. It brings confidence. They do such a great job with the young guys, making them feel comfortable and also holding each other accountable.

"You go back to our championship years and how we won the championships, and I tell them all the time, they have championship blood in them. When you have to do it once, OK, you don't know. But when you do it two or three times, they have it. It's in their DNA, and you can see where their game has picked up and they feel it," Bochy added.

They all feel it. For Sandoval, their recent run has been a reminder of the vibe in the Giants' clubhouse five years ago, when they went from unlikely wild-card winners to world champions.

"This team has a lot of things in common with that 2014 team. The veterans on this team, Madison, Crawford, Belt, are here to show our talented young guys that it can be done, with Buster as our captain, our leader, who leads by example and has taught all of us to give everything for this team," Sandoval said. "We have a lot of young players, that some people would say are not well-known names; it is no longer about Buster Posey, Brandon Belt, Brandon Crawford or Pablo Sandoval. Of course we still have our workhorse, Madison Bumgarner, and our incredible bullpen, and then you look all around at this young talent, every day someone steps up. And whether it be Mike [Yastrzemski] or Alex Dickerson or Austin Slater, any of our young players, any given day, any one of them will help us win.

"That's what we had in 2014," Sandoval added. "There were no heroes, just guys getting things done."

"I can see the similarities," Posey said, also referencing the 2014 team, before making a more clinical comparison. "The main difference thus far for me is that three weeks ago we were like 12 games below .500 and now we're a game over, whereas in 2014 there was more consistency than there has been to this point. But we see guys stepping up, and I think that has been true from 2010 all the way to now. Guys come in from other teams or through the organization that have been able to impact the team in a big way."

"We're fighters; that was the main thing with us, in all our championship years. We weren't going to give up, ever," Belt stated. "Where we were maybe a month or two ago, we could have just rolled over and said, 'Hey, it's done with.' But everybody in here refused to take that mindset. It's about that fighter spirit. We were going to figure out a way to get this done."

"A lot of us believe this is the kind of team we could be," Crawford said. "When you look around and see our lineup, and the experience that we have, and some of the exciting players that we have on this team, this is what we thought we would be. The first two or three months were a shock to our system where we're like, wait a second, we should be a lot better than this."

"We might be getting a little older or whatever, but we still have a lot of experience and still have a lot of talent on this team. And we want to show people that it's not over," Belt added. "Looking back at the last couple of years, yes, there were really bad years, but I think a lot of that had to do with injuries and guys missing time. A lot of things that kind of came together to kind of form a perfect storm of awfulness. But I believe that all along we had it in us to kind of come back and make this run that we're doing right now."

Now the Giants find themselves above .500 for the first time since August 2018, and the front office decided to keep the bulk of the team together for this unexpected, seemingly implausible wild-card quest for Bochy's final year in the dugout.

If there is one thing that these Giants wanted to avoid it was that Bochy's 2,000th career win be celebrated in a clubhouse bereft of the star players who had been there for such a large part of his run in San Francisco. He's just 19 wins away.

"When he celebrated his 1,000th win, we were in New York, and we were doing very badly. We celebrated, but it wasn't the same," Sandoval said. "We want Bochy to end his Hall of Fame career the way he deserves to, putting our best foot forward."

"I don't want to jinx anything, because we have 60 games to go, and baseball, like a lot of sports, will humble you very quickly," Posey said. "Even though we have had a lot of success as a group, when you get your butts kicked for two years, it brings you back down to par real quickly. But in the back of everybody's mind that for Bochy, a guy that's dedicated so much of his life to the game, it will be pretty cool to send him off on a high note."

"You definitely get to appreciate moments like this, for sure," Bumgarner said. "We know it's [Bochy's] last year, and we want to do good for that, because we want to win. 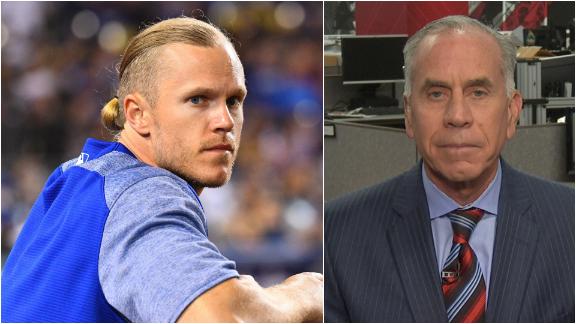