Your move, L.A.: Magic and the Lakers need to hold LaVar Ball accountable 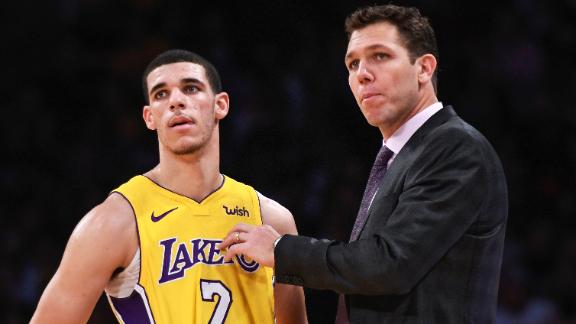 Nobody, not even the Los Angeles Lakers, can act surprised that LaVar Ball told ESPN's Jeff Goodman that head coach Luke Walton has lost the team, all but calling for Walton to be fired amid a nine-game losing streak.

The Lakers may have gone into this relationship wearing rose-colored glasses, but their eyes were wide-open. They scouted Lonzo Ball extensively at UCLA. They had the Bruins' coaching staff over to their offices before the draft. They even drove to the Ball house in Chino Hills, California, to look LaVar in the eye and get a sense of who he was beyond the headlines and television interviews.

Ball looked back at them and said he wouldn't upstage the Lakers or their staff if they drafted his son. As Lakers president of basketball operations Magic Johnson told ESPN in July, Ball told him, "Earvin, look, I'm not following my son. I'm not going to be hanging out in L.A."

Ball confirmed Johnson's recollection, adding: "As far as training my boy, this is as far as I can take him. I'll leave it up to you to take him further. You can get him better with the film time and the coaching. You can take him to another level. I trust you with my boy."

All of those quotes were on the record, which means Johnson and LaVar Ball must both be held accountable for them. Johnson for not calling Ball out publicly once he began to break his promise and for not defending his coach. And Ball for not upholding his word, which puts his son Lonzo in the position of having to choose between defying his father or selling out his coach.

Johnson and general manager Rob Pelinka met privately with LaVar Ball on Nov. 29, asking him to tone down his criticisms of Walton or, at the very least, to come to them before teeing off on the second-year coach.

In that meeting, Ball again told the Lakers what they wanted to hear. But this time, he left himself a very public out, telling ESPN, "I am going to say, to plant a seed, 'Let's look for this now.' They may not want to hear that, but it's going to be successful if you listen to what I'm saying on that fact, that I know what it takes for my son to run like this."

Those quotes were all on the record, too. That should have been enough for the Lakers to know that Ball would never stop his criticism of Walton or anyone who doesn't bend to his will.

But instead of publicly standing behind their coach, or at least admonishing Ball privately, the organization has stuck with a policy of not giving him any oxygen. It was a nice way of handling it. A classy way of letting him promote his business, Big Baller Brand, without standing in his way.

It was also a bit naive in this era of instant hot takes, cable news and social media.

There's always oxygen somewhere, and a firebrand like Ball will always find it. He is a master at creating attention around himself and his family. It is his business plan. The brand has always been more about his swagger than his shoes. Why do you think the Facebook reality TV show about the family is already in its second season? Because not only can Ball create attention, he can also keep it. The only way his platform goes away is if the audience stops watching. And in today's world, there is always an audience, as long as you're willing to go to Lithuania to film it and create a three-episode storyline.

Dallas Mavericks coach Rick Carlisle made a strong point when he criticized this company for giving Ball a platform to go off on an NBA coach. Every journalist, this one included, has had to think deeply about why this particular parent's opinion of an NBA coach -- or really, anything he has said about other NBA players his son might or might not be better than -- should be newsworthy. He's certainly not the first NBA parent with strong opinions. He's just the first NBA parent with this loud of a megaphone.

Frankly, the entire phenomenon has been fascinating to watch and cover, seeing how people react and then discuss what it all means as our society changes from a 24-hour news cycle to a second-by-second, tweet-by-tweet news cycle. And when the situation creates awkwardness for Lonzo Ball, it's relevant to ask whether that affects his play or standing with his teammates.

On Sunday night, it didn't appear to. In the Lakers' 132-113 win over the Atlanta Hawks, which snapped their losing streak, Lonzo had 13 points, 10 rebounds and 6 assists in 30 minutes, and seemed wholly unconcerned with the dust his father had kicked in the Lakers' face from halfway around the world.

One Lakers player said the situation has become a distraction for the team at times. But his frustration was directed mostly at the media for fueling the hype around it, and he was annoyed that Walton, whom he strongly supports, had been dragged into the toxicity.

Walton, for his part, has continued to preach to his team that the only opinions that matter are the ones in his locker room, a classic Phil Jackson approach of letting chaos outside the bubble of the team bring the group closer together. Privately, sources close to Walton said he's more annoyed by the distraction than concerned about his job security.

Sunday night, Walton even tried to defuse the situation with a bit of humor. Asked why he substituted Lonzo early in the first quarter, Walton deadpanned, "His dad was talking s---, so I took him out early." Two seconds later he smiled and said, "Just kidding."

Lonzo did little to quell the firestorm Sunday morning when he said he'd "play for any coach" and did not specifically support Walton. A source close to the player said he's more concerned with establishing himself in the league and helping the team get out of its recent funk than wading into a controversy between his dad and the coach. Privately, there are those in the Lakers organization who have begun to worry about the toll that this tightrope act will take on the 20-year-old point guard if it continues.

Thus far, the Lakers have been silent outside of a New Year's Eve tweet from team president and co-owner Jeanie Buss with the hashtag #InLukeWeTrust. For Buss, who makes a point not to interfere in basketball decisions, that was a giant public statement.

But it was also before LaVar Ball doubled down on his earlier criticisms of Walton, again undercutting the promises he'd made to Pelinka and Johnson. It should be clear at this point that Ball will not stop saying and doing whatever he wants. He has said that many times. So has Lonzo Ball. The Lakers knew that when they drafted Lonzo and decided they were OK with it.

LaVar Ball's current target is Walton. Next it could be Johnson or Buss or Pelinka or any of Lonzo's teammates. There will always be a microphone or television camera around to capture him saying it, whether it's ESPN or any other media entity.

The story now is how the Lakers react. Appeasement hasn't worked. Neither has deference. Silence only makes his voice louder and helps grow the seeds he's trying to plant. 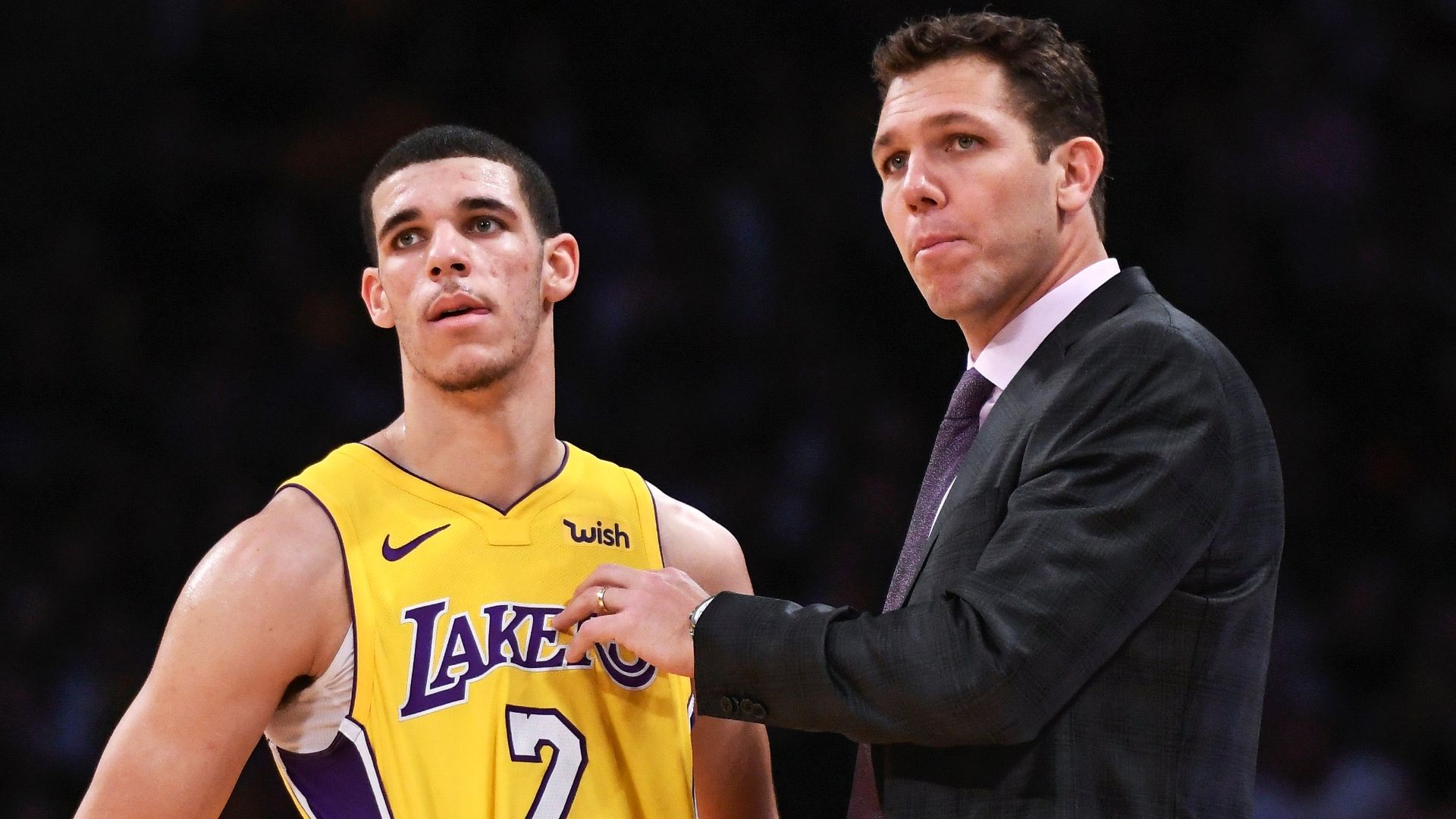 LaVar adding extraneous drama in L.A.
LaVar Ball's comments that the Lakers don't want to play for coach Luke Walton has people wondering if he will negatively impact Lonzo. 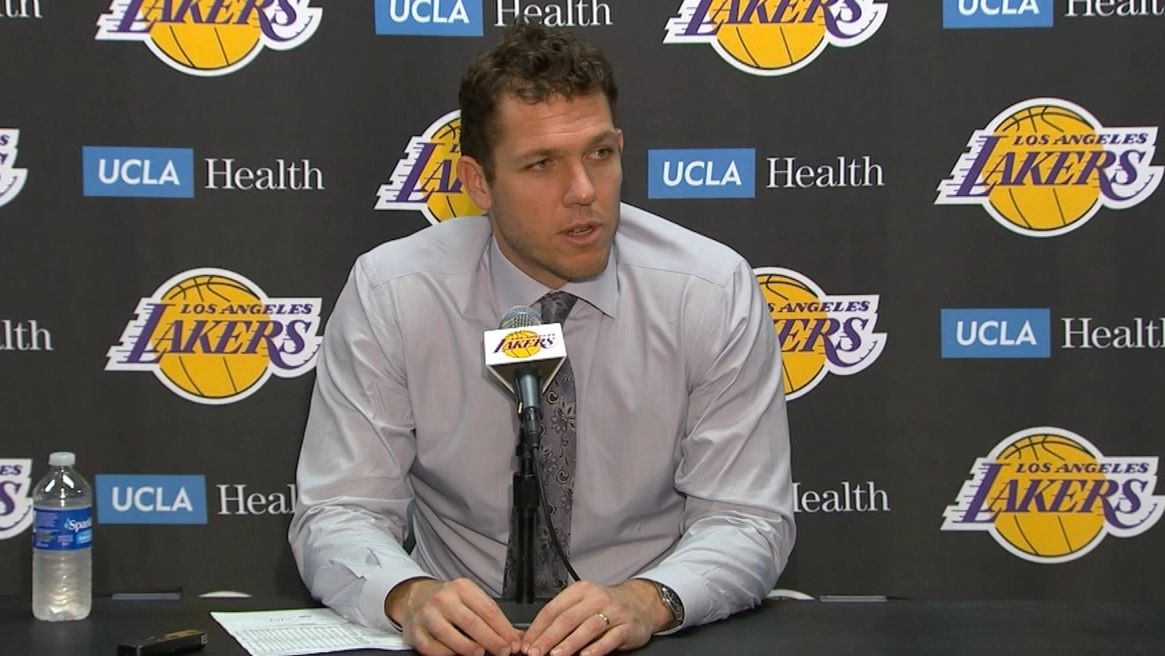