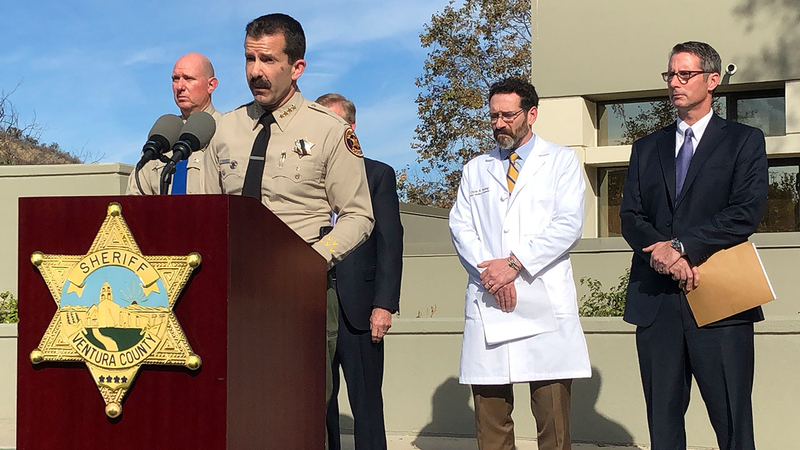 THOUSAND OAKS, Calif. -- The Ventura County Sheriff's Office released details Tuesday on their investigation into the mass shooting at Borderline Bar & Grill in Thousand Oaks but said the motive behind the massacre is still unknown.

Ventura County Sheriff Bill Ayub revealed at a news conference that suspected gunman David Long used a .45-caliber semiautomatic pistol and fired more than 50 rounds when he killed 12 victims inside the popular country bar on Nov. 7.

He was also equipped with seven high-capacity 30-round magazines, five of which were found still fully loaded after he killed himself. Such magazines are illegal to buy and possess in California but can easily be purchased in neighboring states.

Officials said the number of victims in the massacre could have been much higher based on the amount of ammunition the suspect had.

The sheriff also confirmed that Long threw multiple smoke grenades that contributed to chaos and confusion inside the bar that night.

FBI official Paul Delacourt said there's no evidence that 28-year-old Long was radicalized, and investigators are still trying to figure out his motive for the attack.

"We are no closer to determining that today than we were on the onset of the incident," Ayub explained.

Officials also said there's no evidence he was targeting an ex-girlfriend at the bar. Officials had previously said they were looking into that possibility.

Officials added that 13 victims total were struck by gunfire, and only one of them survived. A medical examiner's office official said the victims were hit at close range, and evidence indicates all had injuries caused by the guns carried by the suspect and not law enforcement.

Ayub also revealed that Long had a folding knife with him. The coroner's official said one victim had been stabbed in the neck, in addition to having several gunshot wounds.

Long, a former machine gunner and Afghanistan war veteran, attacked the bar on a busy weekday night, firing into the crowd as some hurled barstools through windows to escape.

When sheriff's Sgt. Ron Helus and a California Highway Patrol officer responded within minutes of 911 calls, Long was ready, and ambushed them from a position of tactical advantage, Ayub said. Helus was among those killed, though neither of the officers' bullets hit Long.

The FBI is putting together a shooting reconstruction report, and the sheriff's department is working on a detailed timeline of exactly what happened the night of the shooting. To do that, they've been looking at surveillance and body camera video and have been interviewing witnesses around-the-clock since the shooting occurred.

Investigators are also looking into the suspect's social media. Long posted during the attack about whether people would think he was insane.

Officials also spoke about the suspect's only contact with sheriff's deputies in the past.

"Deputies contacted the suspect and evaluated him. He did not express a desire to harm himself or anyone else. He was upset over a financial issue between him and his mother. During the incident, he had acted out by punching holes in the walls of the house. His mother confirmed his son's outburst was related to money. Deputies determined he did not meet the criteria for a mental health detainer..." Ayub said.

The massacre remains an ongoing investigation. Officials said the FBI has evidence at a lab in Quantico, Virginia, and any more information may take weeks or even months to disclose.

The mother of Telemachus Orfanos, one of the victims in the shooting, was at the press conference with a message.

"We can't do much, but we can do this," said Susan Orfanos. "We can do common-sense steps to have gun violence stop in this country."

A candlelight vigil was held at 5 p.m. on the campus of Cal State Channel Islands. Students, staff and members of the public were invited to gather and honor the victims.