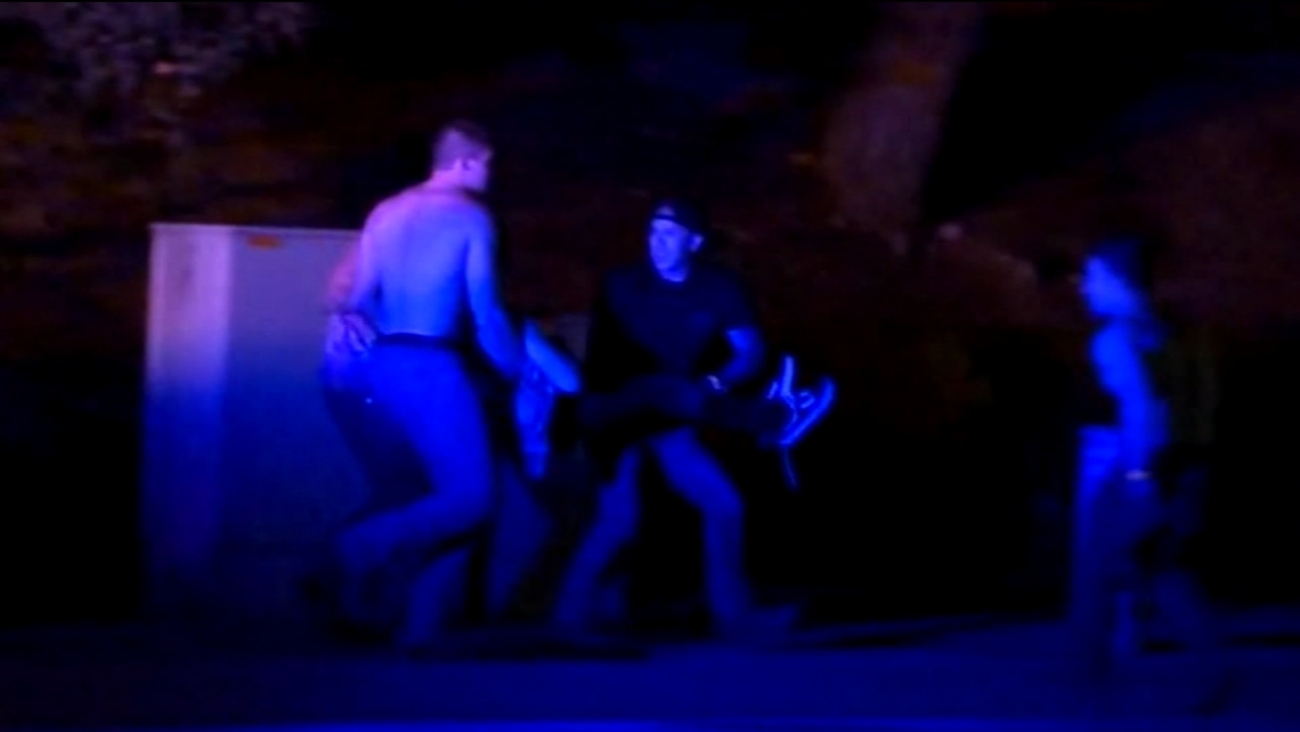 Venutra County sheriff's Sgt. Eric Buschow, as well as Sheriff Geoff Dean, said the suspect was killed inside the venue. They did not want to count him among the 12 victims.

In an emotional press conference, a Camarillo man confirmed his son, 22-year-old Cody Coffman, was one of the victims killed in the tragedy.

"This was my first-born son. I am speechless and heartbroken," his father said, as tears ran down his face. "My life has changed forever."

Authorities identified the suspected shooter as 28-year-old Ian David Long, a former machine gunner and decorated combat veteran of the United States Marine Corps, according to sheriff's officials. They added that they believe Long fatally shot himself after the massacre. He was found inside an office near the entrance of the venue.

A motive for the shooting is still unknown.

His gun, which appears to be a .45-caliber handgun, was purchased legally, according to ABC News. AP reports that he also deployed a smoke device.

Long lived in the 800 block of Newbury Park with his mother, about about 5 miles from the shooting scene. Deputies responded last April to the home over a call of a family disturbance. Mental health specialists talked to the suspect that day and cleared him, Dean said. Law enforcement officials are now at the Newbury Park home as part of the ongoing investigation.

One other person was wounded by gunfire, and as many as 15 others suffered minor injuries from jumping out windows or diving under tables, authorities said.

A man helped rescue possibly as many as 30 people after shots were fired at a bar in Thousand Oaks late Wednesday night.

Dean said the gunman immediately shot a security guard after entering the bar, turned to the right and shot several other security officials, employees and patrons.

Authorities said hundreds of people were inside the bar when the gunfire rang out. In an interview, Buschow came close to tears and said he knows the sergeant who died.

During a 3 a.m. press briefing, Dean identified the sergeant as Ron Helus, a 29-year veteran of the department who considered retiring within the next year. At points he choked up, but said that Helus died a hero.

Helus was the first officer inside the door, Dean said.
"Ron was a hardworking, dedicated sheriff's sergeant. He was totally committed. He gave his all and tonight, as I told his wife, he died a hero because he went in to save lives, to save other people," he said.

Helus was immediately hit with multiple gunshots, Dean said. The highway patrolman pulled Helus out, then waited as a SWAT team and scores more officers arrived. Helus died early Thursday at a hospital.

By the time officers entered the bar again, the gunfire had stopped, according to the sheriff.

Dean also said in his 41 years in law enforcement, he'd never experienced a mass shooting. He described the scene as "blood everywhere." He later revealed the massacre happened on his last day serving as sheriff.


No other victims have been identified by officials.

Helus was transported at 10 a.m. via motorcade from Los Robles Hospital to the Ventura County Medical Examiner's Office in the city of Ventura.

Firefighters honored Helus with a giant U.S. flag raised by two ladder trucks over the route. People lined the streets as the hearse went by.

President Donald Trump tweeted that he has been "fully briefed on the terrible shooting." He praised law enforcement, saying "Great bravery shown by police" and said "God bless all of the victims and families of the victims."

Witness John Hedge, of Moorpark, said he saw the suspect throwing smoke bombs into the front of the restaurant. He also said he saw one security guard get shot.

"I was at the front door and I was talking to my stepdad. I just started hearing these big pops. Pop, pop, pop. There was probably three or four, I hit the ground. I look up - the security guard is dead. Well, I don't want to say he was dead, but he was shot.

"He was down. The gunman was throwing smoke grenades all over the place. I saw him point to the back of the cash register...and he just kept firing. I ran out the front door," he said.

Hedge added that there may have been about 12 shots by the time he got out of the door.

He described the gunman as having a beard and wearing a hat, black jacket and may have had glasses.

"I thought it was a joke when the shots started firing. I know people there. I hope everybody's OK. I don't know how I didn't get shot," the man said.

Tim, Hedge's stepfather, who was in tears, said he was next to the entrance about to leave after playing pool when smoke came into the room.

"He fired the first shot. I knew it was live. I knew it was real. My son thought it was a joke so I pulled him down and got some cover. I looked up and he was moving to the right. He shot the front doorman, who was just a young man. Then he shot the cashier, just a young girl.
"Then he started moving to the right. He wasn't looking at us. Then he went into the office, where all the cash and stuff is. He didn't say anything at all. He just started shooting," he said.

We have sent patrol and SWAT resources to assist with the incident in Thousand Oaks. We will continue to monitor and provide whatever resources are requested. Please keep the victims in your thoughts & prayers.

FBI agents were also at the scene.

The country bar is located near the 101 Freeway off Moorpark Road.

The website for Borderline showed that Wednesday nights are College Country Nights that last from 9 p.m. until 2 a.m. Colleges near the club are California Lutheran University and California State University, Channel Islands, as well as Moorpark, Ventura and Oxnard College.

Students from Pepperdine University in Malibu also often attend College Country Nights, and there may have been some at the bar Wednesday night. It was unclear how many, according to the university.

Statement from @pepperdine regarding reported mass shooting at #Borderline in #ThousandOaks. Confirms several #Pepperdine students were there tonight along with students from colleges and community colleges all over the area. Pepp‘s my alma mater. Just awful. @ABC7 pic.twitter.com/ilcQx7WHu1

California Lutheran University sent an alert to students that all classes are canceled for the day.

An Emergency Information Hotline to assist locating people that may have been involved in the #BorderLineShooting incident has been established by @Venturaoes: at 805-465-6650

A family unification center was set up at 1375 E. Janss Road, where several devastated families waited to hear news about their loved ones.

"Unfortunately our young people, people at nightclubs, have learned that this may happen, and they think about that," the sheriff said. "Fortunately it helped save a lot of lives that they fled the scene so rapidly."