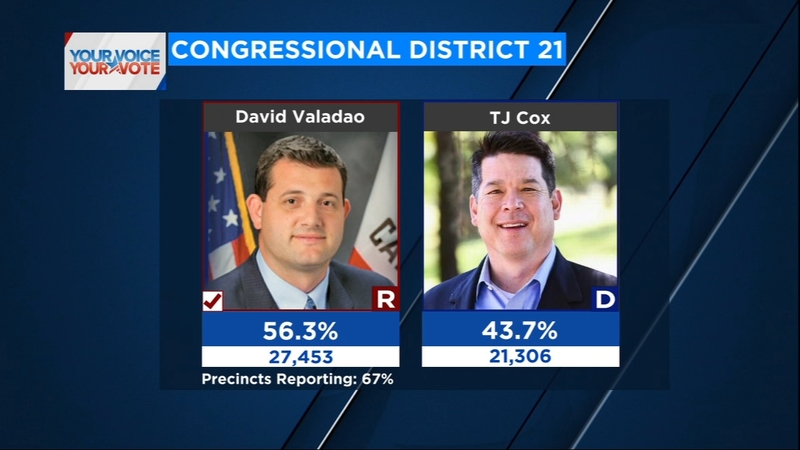 FRESNO, Calif. (KFSN) -- Rep. David Valadao is facing a tough re-election fight for a fourth term, against a challenge by businessman T.J. Cox.

Congressman David G. Valadao was born and raised in Hanford, California in the center of the agriculturally rich Twenty-First Congressional District. As a lifelong resident of the Central Valley, he has been active in agriculture and dairy industry groups, as well as many local causes including Children's Hospital Central California, 4-H, Future Farmers of America, and various Catholic charities.

In 2012, Valadao was elected to represent California's 21st Congressional District, which includes Kings County and portions of Fresno, Kern, and Tulare Counties.

Dem. TJ Cox has funded clinics in Fowler, Mendota, Parlier, and Sanger, creating over 250 local healthcare jobs and serving over 40,000 residents here in the 21st. Cox is currently working on health clinics in Selma, Lemoore, Huron, Reedley, Orange Cove, Firebaugh, Tulare, and Bakersfield. In Congress, he will lead the fight to ensure everyone has access quality, affordable care.

Cox released a statement regarding the election, "Thank you to each and every one of my supporters for their hard work these past days, weeks and months. Thank you to my family, and especially my wonderful wife Kathy, who has been an anchor in what, at times, were very rough seas."