Children among 4 killed in Fresno County crash with semi-truck; 3 others injured 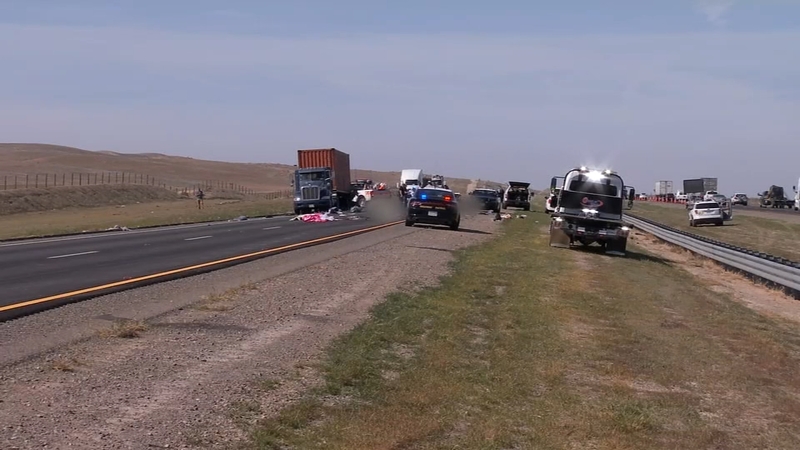 Children among 4 killed in Fresno County crash with semi-truck

Investigators say the driver of a Chrysler Aspen SUV was southbound on the interstate. He drifted into the west shoulder for an unknown reason, and the car slammed into the back of an 18-wheeler truck.

The Chrysler was heavily damaged in the crash. The front portion of the minivan stayed stuck to the 18-wheeler, and the rest of the vehicle was seen a few yards south.

Some of the passengers in the SUV were ejected onto the road.

The 52-year-old driver of the Chrysler, a 37-year-old man and a 12-year-old girl were all taken to Community Regional Medical Center in Fresno with major injuries.

Both families were from Washington.

Officials say the 18-wheeler was empty at the time of the accident.

Officers are still working to determine what caused the driver to drift into the interstate shoulder.

The lanes were closed off for about six hours while traffic was diverted toward Kamm and Derrick Avenues.

Right now, truck drivers feel they sometimes have no other option than to pull over on the side of dangerous roads.

Drivers in the trucking industry who make their way through Fresno County said they were not shocked to hear of another fatal crash involving a semi-truck.

Truckers on the road say more rest areas are needed along Central Valleys' roadways. Right now, truck drivers feel they sometimes have no other option than to pull over on the side of dangerous roads.

When asked how similar accidents could be avoided, drivers agreed on a simple solution.

"A place to park, spend the night comfortably and not worry about having to park on the outside," says Pete Vargas. "We need a safe place to park."