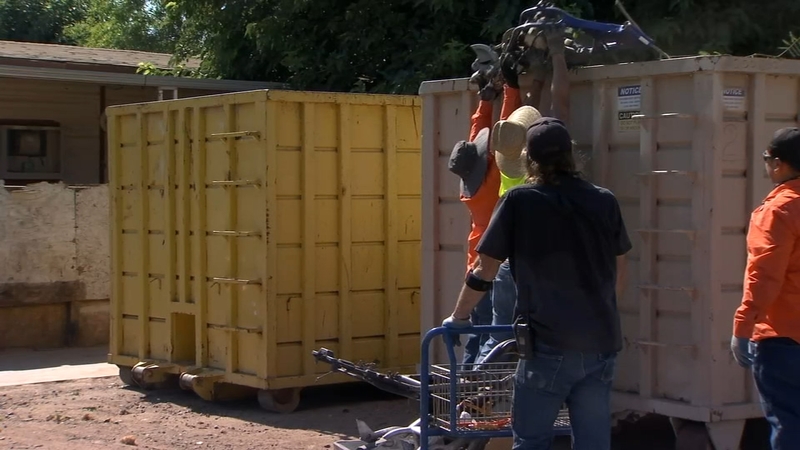 FRESNO, Calif. (KFSN) -- Barbara Smith has lived in the Trails End Mobile Home Park for 17 years and never imagined her home and the property that surrounds it would be blighted by crime, debris, and overgrown trees.

She says, "It was quiet. It was family-oriented. It was manicured. The pavement was done, there wasn't all the trash."

A stark contrast from what could be seen Thursday. Her home, just feet away from the site of a deadly fire that killed her neighbor, Ron Richardson, two months ago. She's now breathing a sigh of relief that the city is stepping in.

Smith adds, "We're finally feeling like were getting some help, they're doing a wonderful job and we just couldn't be happier."

The mobile home park has been the site of four fires in the last two years.

Mayor Dyer says, "The tenants here deserve to live in good healthy conditions and that is not what we have today."

After being turned away by the state Monday, city leaders including Mayor Jerry Dyer and Councilman Gary Bredefeld spent Thursday meeting with residents and clearing hazards -- now that Trails End is officially under the city's control.

"Illegal electrical hookups, lack of water and sewer here in the mobile home park. We have running stagnant water that's a breeding ground for mosquitoes," he said. "Our number one focus is to not let these people down, and let them know we're here. They've been failed once already."

Once the immediate dangers are resolved, the city will begin to address each individual lot. Horton says they're exercising all legal options to make sure Trails End is a safe place to live.