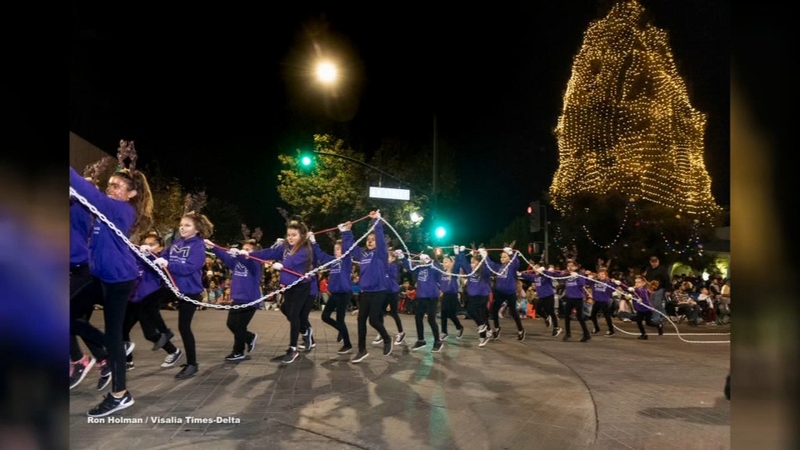 TULARE, Calif. (KFSN) -- Tulare Downtown Association Director John Harman is the man in charge of decorating the massive tree at the corner of Tulare Avenue and K Street every Christmas.

This year, he and his crew tried something new - net lighting, which Harman says was well-received at the downtown parade earlier this month.

"And then of course before we had a chance to come back out because of the weather and our schedules, somebody picked up on it and that's when all the flaws started to be pointed out."

There were some critical social media posts, and a few days later, the Visalia Times-Delta said it all with this headline: 'A gaggle of grinches is dissing Tulare's 'janky' Christmas Tree.'

"Pioneers take all the arrows," Harmon said. "So we're pioneering something here, we're trying something a little bit different to see if we can bring a different look to our tree versus everybody else's tree."

But many stepped in to defend the tree too.

"And even some communities were saying, 'You ought to see our tree if you think that's bad,'" Harman said. "So I was like, 'Well see, things aren't as bad as we think they are.'"

There are 60 nets on the tree.

One of the problems, Harman says, was that some of the controllers for the lights failed in the wet weather - creating a patchy, some have said tacky, look.

But after the social media storm, the crew reset the controllers and added a dimmer and timer.

Harman has also taken the opportunity to have some fun with it all.

On the Tulare Downtown Association's website, you can 'Save the Downtown Tree' by making a donation or by buying a sweatshirt that says, 'I survived the janky tree.'

The bottom line is that Harman is open to suggestions for next year.
"More ornaments, more lights, maybe like a bigger net to cover the entire tree," 12-year-old Jose Lara said.

Jose's mother thinks the tree is different but likes it.

She knows it must take a lot of work.

"Imagine doing that kind of thing, it's kind of hard for me to think right now," said Judith Bandera. "But yeah, everything they can do next year will be welcome."

The tree could have a new look next year, so if you want to see the janky one, don't wait too long.

The decorations come down in a couple of weeks.