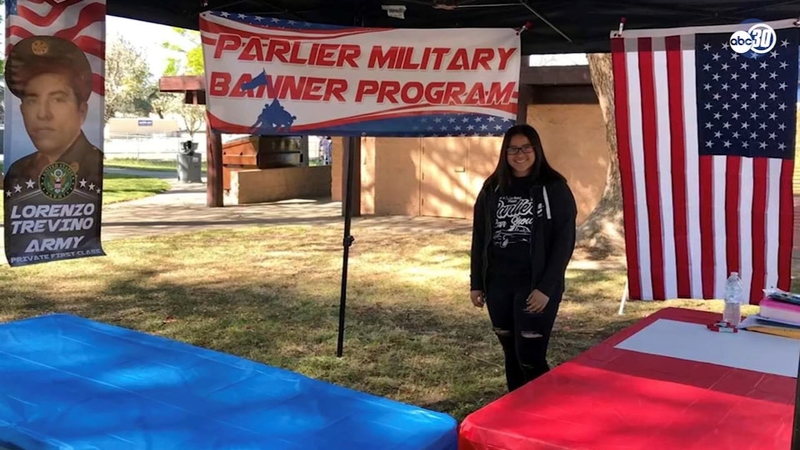 PARLIER, Calif. (KFSN) -- Like many Central Valley cities, Parlier has a history of military representation. Until this week, you may not have known about it if you were driving through town.

"I just thought it'd be something nice to do for Parlier," said Parlier High School junior Isabelle Gonzales. She's president of her class with a 4.2 GPA and a spot in the lineup on the varsity softball team, but in her spare time, she created something that will last long after high school.

Gonzales launched the Parlier Military Banner Program earlier this year as part of an effort to honor veterans and military members who hail from Parlier.

"I think we should be proud of them," she said. She got the idea after her grandmother saw a similar program operating in Sanger. Gonzales recently stopped accepting applications after taking them in for months. Military families had the opportunity to pay for the banner or seek out a sponsor (SoCal Gas was one sponsor). The payment went towards covering the cost to create them, as there will be no profits made by Gonzales in this venture.

"It's just like to show that we're proud of our veterans and to give the family something, so they can see we appreciate what their family did and sacrificed," she said.

In total, 26 banners will be hung on Parlier Avenue this week, just in time for the Parlier Roundup Parade on Saturday at 11 a.m. Gonzales says she already has 13 veteran banners lined up for next year, and she'll reopen the application process in 2020.

The effort is not out of character for Gonzales. She organizes a program each year to gather gifts for foster children at Transitions Children's Services. In 2018, more than 500 gifts were donated to the kids, who also benefitted from a backpack drive Gonzales held in 2018 as well. She received the key to the city of Parlier when she was 15 years old.