From vodka to whiskey, Corbin Cash uses products they grow on their nearly 100-year-old Valley farm.
KFSN
By Amanda Venegas 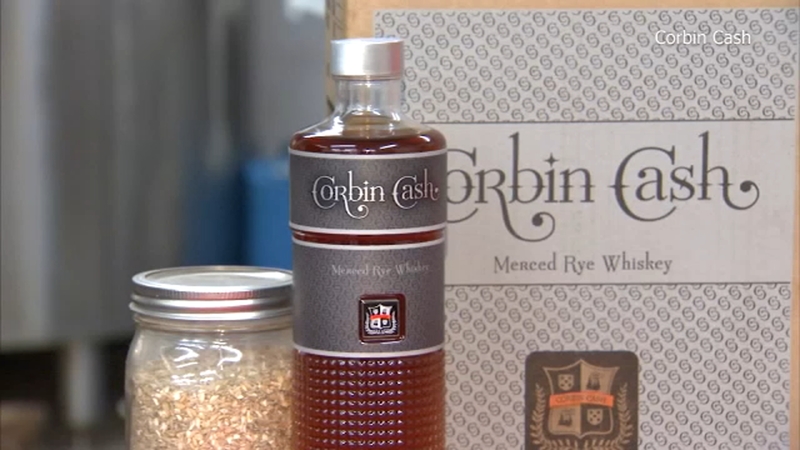 MERCED COUNTY, Calif. (KFSN) -- From the field to your glass, bourbon made in the Central Valley is getting some recognition on a larger level.

Recently, Corbin Cash's bourbon made in Merced County won Best Bourbon of 2021 by the Los Angeles Spirits Awards for its Sour Mash Bourbon.

"We get the corn locally, and then it also involves our rye, which is off of our farm. But yeah, it was; we were pretty surprised, we thought we'd actually get the best award with our rye, and it ended up being the bourbon. So hey, we're not going to complain," said David Souza.

Souza is the owner of Corbin Cash, which makes a variety of spirits from vodka to whiskey.

Most are made from products they grow on their nearly 100-year-old Valley farm.

Each batch is carefully crafted.

"We're a small craft distillery. So that allows us to really make strategic cuts in the product to get just the best parts of the whiskey as it comes off the still," Souza said.

Custom-made barrels are put together in Fresno, which Souza says also helps with the flavor profile.

It's been an interesting past year for the company.

"We obviously lost a lot of business in the restaurant world because they were all closed, which was pretty heavy for us. But what we lost out there we've actually four times into the distillery because our distillery is kind of an outdoor venue, so we were able to be open during the pandemic," Souza said.

They've been able to bring people to the farm and host events, similar to a winery.

He hopes one day to build a new location.

You can find Corbin Cash spirits at liquor stores like BevMo, Total Wine, and Costco in Fresno.

However, the award-winning bourbon is sold at the distillery.

Souza says creating spirits have been years in the making.

"It's just seems like we just got started, but it's it's been a long journey. It makes me happy that we actually have some now that are going to be pushing eight years so, which is pretty unheard of for a distillery our size," Souza said.

It's a spirited product with a smooth flavor and roots in the Valley.