2021 MLB playoffs: A tense NLDS Game 5 was a fitting end to this Giants-Dodgers series 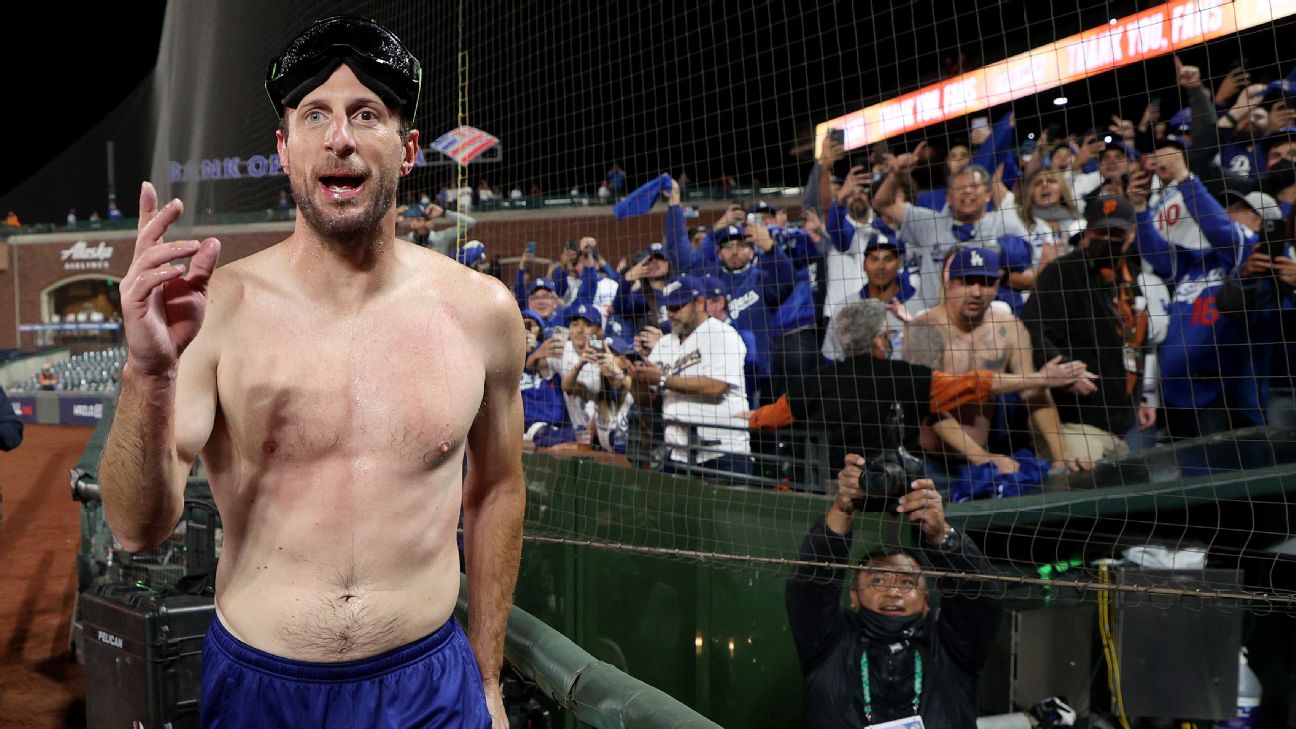 SAN FRANCISCO -- There's something about elimination games that manages to condense the air in a ballpark. Each pitch carries the potential to change the game, and wild mood swings are possible in a single at-bat. The world shrinks, and for a few hours it can feel like the only thing that matters.

And this game -- Game 5 of the National League Division Series between the Dodgers and Giants -- began to feel inevitable sometime around August. After a regular season that saw the Giants win 107 games and the Dodgers 106, after a series that saw each team win two of the first four games, there was little doubt this game would do its best to measure up to its considerable hype.


It was a tense, constricted affair, won by the Dodgers, 2-1, in the final inning. There were countless moments when it became clear what it sounds like when more than 40,000 people hold their breath simultaneously.

These two teams played 24 times this season, and each team won 12. The final game, fittingly, was tight and edgy and filled with notes in the margins.

Even over the course of just five games, themes emerged. Giants starter Logan Webb, his chin all right angles and his gait covering as much ground side-to-side as forward, was obstinate once again. He threw seven innings of one-run, four-hit, seven-strikeout baseball to finish his two NLDS starts with 14 2/3 innings, one run and 17 strikeouts. He emerged as the kind of big-game pitcher who wants the ball and is not interested in giving it up. His work took on a metronomic precision: He would finish an inning like he was renting the mound by the minute and strut his way back to the dugout, giving manager Gabe Kapler a no-look fist bump without breaking stride.

"At every stage, you're asking yourself, 'Is Logan Webb the best option to get the next three hitters out?'" Kapler said. "And every inning that we sent him out there, we felt like, 'Yes, yes and yes.'" When the Dodgers looked for his slider low and away, Webb gave them a 94 mph sinker that ran in on right-handed hitters. When they looked for the sinker, he gave them a changeup that got within four feet of the plate before ducking under bats. If pitches had personalities, Webb's slider would be loud and brash, and his changeup would be the sneaky kid who always gets everyone else in trouble.

Webb, who revealed that he's three Red Bulls in by the time he heads to the bullpen to warm up, ran his scoreless streak in the NLDS to 13 innings before Corey Seager hit a looping double to left in the sixth to score Mookie Betts and give the Dodgers a 1-0 lead. When it happened, when Betts finished his tour of the bases -- a single, his third of the game, followed by a stolen base -- it felt like an insurmountable lead. (The stats back it up: In the 24 games between these two teams, the team scoring first won a remarkable 22 of them.)

And then, of course, Darin Ruf led off the bottom half of the inning by sending a booming 452-foot homer to center that sounded like a lightning bolt splitting a tree. The place came alive, at least three Red Bulls' worth of alive, and it appeared the Giants would do what they'd done all season: simultaneously defy the odds and frustrate the Dodgers.


"It's two teams that don't like each other but respect the hell out of each other," Dodgers pitcher -- and Game 5 closer -- Max Scherzer said. "At the end of the year, we thought we had 'em, but they would not lose. They. Would. Not. Lose. So we couldn't, either."

But in the end, the Dodgers found a way. Cody Bellinger, who is crafting a postseason that could go a long way toward exorcising his miserable, injury-filled season, dribbled a ninth-inning single to center off Giants' closer Camilo Doval that scored Justin Turner with the winning run. As Turner crossed home plate, Bellinger stood at first and directed a primal scream toward the Dodgers' dugout. It was his second pivotal hit of the series; his two-run double in Game 2 cleared the way for a 9-2 win, and his at-bats as the games progressed bore less and less resemblance to the ones that produced a .165 average and .542 OPS during the regular season.

"It wasn't about mechanics," Dodgers manager Dave Roberts said. "It was just about a fight. It was me vs. you, Cody vs. Doval."

And long after the game, Bellinger jogged through the tunnel from the interview room toward his clubhouse, Dodger fans lining the walls on both sides of him, chanting his name. It was a scene that would have been unimaginable just two weeks ago.

Bellinger's hit came off the fourth straight slider from Doval. It raised questions; given Bellinger's season-long inability to catch up to high velocity, why did the Giants choose to forsake Doval's 100+ mph fastball for a pitch more attuned to Bellinger's hitting speed? Doval, who stood up and answered questions afterward -- something far easier to avoid with the clubhouses closed to reporters -- said he leaned on his slider because he felt it gave him the best chance of inducing an inning-ending double play.


"Oh, man, the first thing I did was give him a hug, just because he feels awful," Webb said. "Which is kind of brutal, because he pitched so well for us. For that to happen, for him to be the guy who gave up the run, it just sucks."

Scherzer's first career save came with a final out the Giants will remember but MLB would like to forget. Wilmer Flores was called out on appeal by first-base umpire Gabe Morales on a check swing in which he clearly held up. The call prompted fans behind and around the first-base dugout to overcome the protective netting to fire trash and liquids toward Morales.

Which proves once again: Even in its best moments, baseball manages to find a way to divert the narrative. Morales came to the postgame interview room with crew chief Ted Barrett, which seemed admirable until Morales was asked if the replay changed his mind on the call and Barrett answered for him. "Yeah, no, we, yeah, yeah," Barrett said, in a manner that sounded less melodic than it looks. "He doesn't want to say."

In a twisted way, the controversial ending only served to underscore a point: The only thing wrong with this series is that it's over. 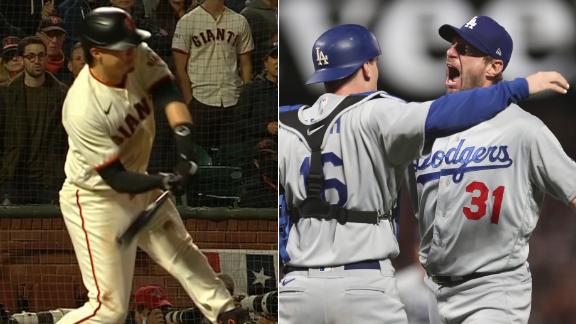 Questionable check-swing call sends Dodgers to NLCS
Wilmer Flores appears to check his swing, but the first base umpire calls him out, securing the series win for the Dodgers over the Giants. 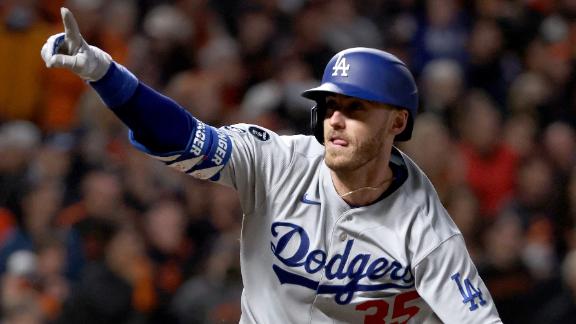