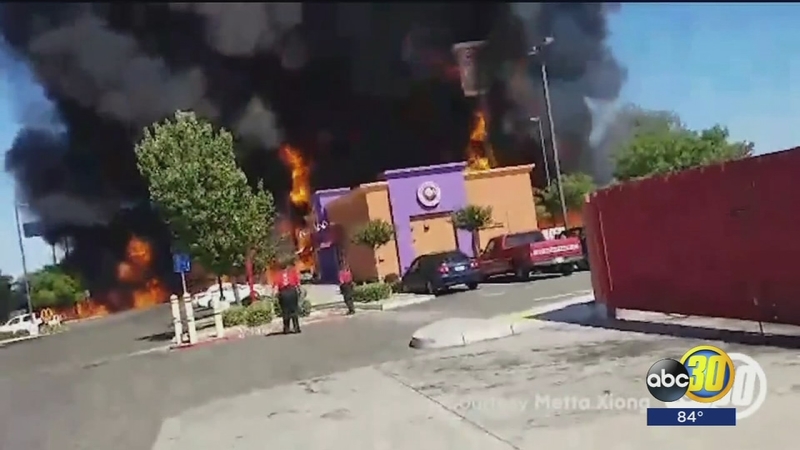 ATWATER, Calif. (KFSN) -- A grisly scene slowly restored back to order-- the aftermath of a fiery morning that set the west side of Atwater on fire.

"You could hear the tanker hit and the cars just exploding one after another," said Metta Xiong, manager of the Panda Express.

Xiong was there when the west side of Atwater burst into flame. She shot video of panicked Panda Express employees scrambling to flee.

"I heard three explosions from the gas truck, and then two more, and I was like yeah that's my car right there," said David Velasco, employee.

Velasco was in the kitchen cutting vegetables when he saw flames shoot outside his window. He nearly died trying to save his car which was destroyed by the fire.

"I was running, I kind of stopped, I second guessed myself, because if I turned on the car, the fumes would have got in and I would have exploded."

CHP officers said the tanker was carrying 8,100 gallons of oil when it crashed-- the driver died on scene.

Remediation can take anywhere from days to weeks and the last we spoke to business owners they heard it could be a month until they are cleared to open.

Jim Price, the Mayor of Atwater, said, "This intersection is going to be down for some time, more than likely we are going to have to figure out an alternate route through the gravel to come up into there."

City leaders said they are working as quickly as possible to restore a sense of normalcy, especially since the plaza is one of the biggest revenue generators for the city.

For those who live in and frequent the area many are just grateful that money is the extent of their casualties. .

"I'm thanking god right now, he made me stop-- just leave it's a car, it's materialistic," said Velasco.

Hundreds of people were quickly evacuated from the area, as Merced County Fire official?s sprayed foam on the flames.