Russell Okung wants system where NFL players would have 'one voice' 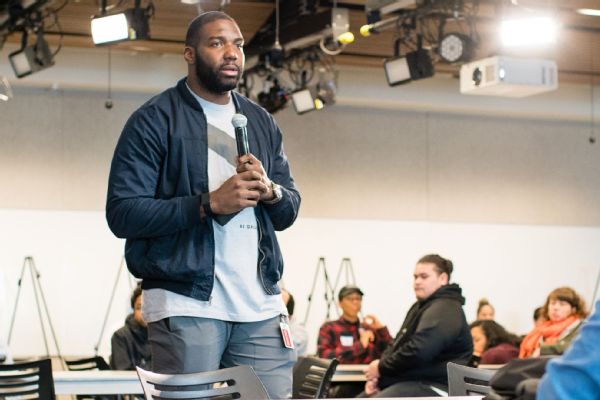 Okung wrote an open letter to other NFL players on The Players' Tribune, published Friday, with the goal of overcoming "uncharted territory" by opening a line of communication and responding with "one voice" as players.

"Owners have the ability to quickly and efficiently communicate, collaborate and align their objectives to serve the broader interests of the shield," Okung wrote. "By and large, they are carrying out a strategy to this end, regardless of how it impacts us as players and regardless of how much it reflects our actual will. I don't mean this to sound disparaging or suspicious of all NFL owners. Again, it's just an observation of how the system is designed. It is, in many ways, what we all signed up for.

"While I don't have all the answers as to how to ensure we are not robbed of this moment, I am convinced that we will never make progress if we do not find a way to come together and take action that represents the will of the players. What we have is strength in numbers. But our strength is currently not being leveraged because we have no means of direct communication that is not -- in some way, shape or form -- controlled, monitored or manipulated by outside forces."

Okung has not participated in any of the player protests during the national anthem. However, he has been outspoken about the Colin Kaepernick situation on Twitter.

He's also a good friend of Seattle Seahawks defensive end Michael Bennett, who conducted his own protest against racial inequality and police brutality this season by sitting during the national anthem.

"In our country there's always been contrarians, and those contrarian views have always helped our country progress as well," Okung said. "We have things now, freedom of speech, freedom of assembly -- those things matter to us and they are things we've been able to fight for over the course of history."

Okung believes the NFL Players Association, "for better or worse, is limited in its capacity to 'unify' our interests" and that the original intent of Kaepernick's message is being "diluted."

"Rather than our collective voice prevailing in a way that spans the league, you are seeing individual teams respond separately to the protest in 32 different ways," Okung wrote.

His idea is to formulate a plan of action through direct communication via Twitter.

"Let's open up a line of communication just between us, and be ready to respond with one voice as players," Okung wrote. "Let's transcend the 'natural' divisions that have been defined by the league and sanitized by a fictional narrative of competition above all else."

The NFL and NFLPA released a joint statement Wednesday confirming that there has been no change to the policy that recommends, but doesn't require, players to stand for the anthem. Commissioner Roger Goodell, NFLPA executive director DeMaurice Smith and player leadership will attend league meetings next week to discuss how to progress on social issues and to talk about the subject of protesting during the anthem on a larger scale.

Lockhart pointed out that Goodell met with a group of players in August on how to start a dialogue to address the anthem issue, along with players' concerns regarding racial injustice and police brutality.

Lockhart went on to say the league followed that initial meeting by going out to see the work being done by players to build bridges in the community with law enforcement. Examples included a day spent with Philadelphia Eagles owner Jeffrey Lurie, Malcolm Jenkins, Torrey Smith and Chris Longand the city's chief of police. Another was joining Miami DolphinsplayersKenny Stills, Michael Thomas and Julius Thomasfor a ride along with local law enforcement officers.

"The dialogue has been extensive, positive and productive," Lockhart said. "And we look forward to continuing it well beyond next week."

Okung, whosigned a four-year, $53 million deal with the Chargers this past offseason that included $25 million in guaranteed money, has let it be known that his dream is to own an NFL franchise. He has invested in technology businesses and negotiated his own contracts.
Report a correction or typo
Related topics:
sportsespnlos angeles chargersroger goodellnational anthemtwitterone voicenfldemaurice smithnflpacommunicationrussell okungcolin kaepernickkneeling
Copyright © 2020 ESPN Internet Ventures. All rights reserved.
More Videos
From CNN Newsource affiliates
TOP STORIES