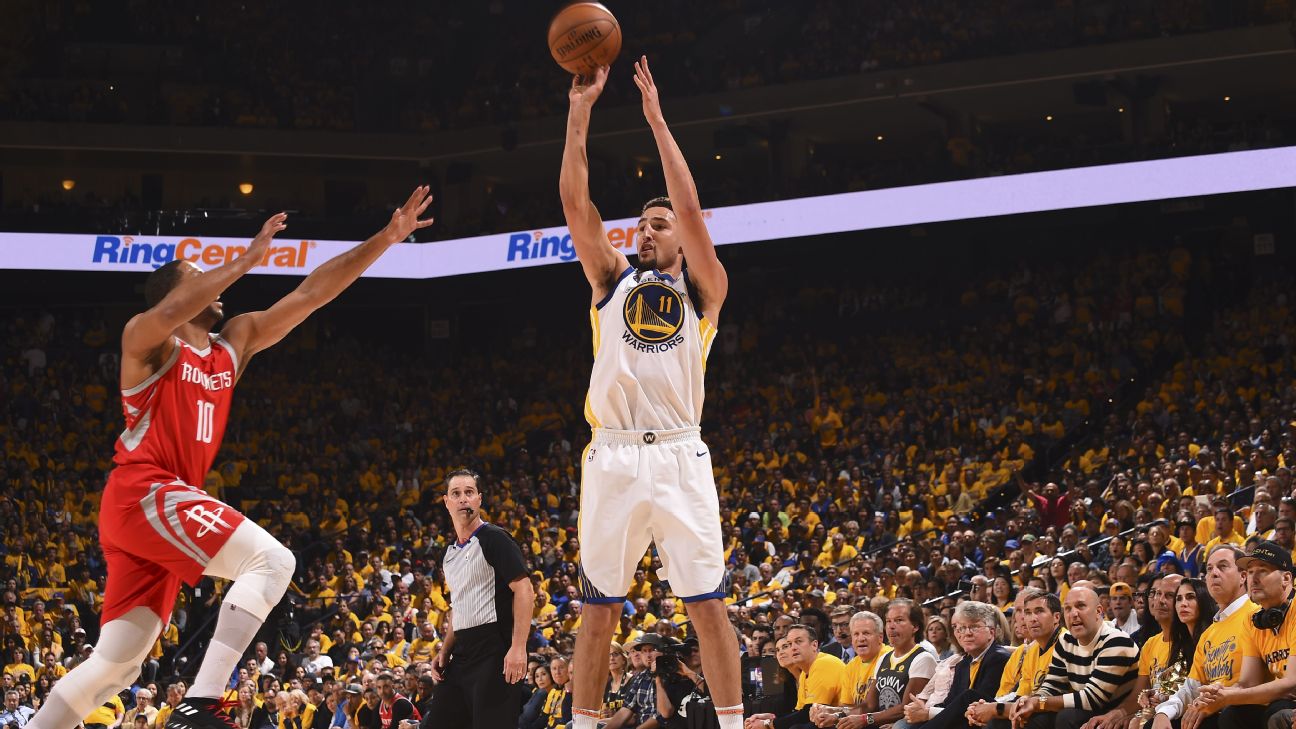 OAKLAND, Calif. -- Before it become a rallying cry for the Bay Area community, the "Strength in Numbers" slogan on the yellow T-shirts handed out to fans at playoff games in Oracle Arena was originally coined by coach Steve Kerr to emphasize the importance of the star-studdedGolden State Warriors' depth.

For Houston Rockets coach Mike D'Antoni, the phrase has a completely different meaning. The Rockets' version of strength in numbers is launching as many 3-pointers as possible and hitting enough to win a heck of a lot more often than not.

But it's hard to beat the Warriors in a shooting contest, particularly when Chris Paul is wearing warm-ups and nursing a strained right hamstring on the bench.

The Rockets, hoping to knock out the defending champs, roared out to a 17-point lead in the first quarter and led by 10 at halftime, draining 11 of their 22 3-point attempts in the first 24 minutes. Then the Splash Brothers started sizzling.

Game 7, which was made necessary by the Warriors' 115-86 victory in Game 6 on Saturday, will be Monday night at Houston's Toyota Center.

Eric Gordon, who replaced Paul in the Rockets' starting lineup, hit more 3s by himself in the first half (4-of-4) than the sweetest-shooting backcourt in NBA history, as Stephen Curry and Klay Thompson combined to go 3-of-13 from beyond the arc.

The third quarter, which the Warriors so often dominate, was a completely different story.

Golden State took the lead with an 11-0 run to open the half, featuring a couple of 3s by Thompson and another by Curry. Houston's James Harden threw some counterpunches, but the Warriors were in command by the end of the quarter.

Thompson and Curry combined for 21 of the Warriors' 33 points in the third quarter -- and did all of the damage from deep, going 7-of-9 from 3-point range in the frame. The Rockets, whose rotation is realistically down to 6 players, came out of the break looking gassed and scored a grand total of 16 points in the quarter.

Curry and Thompson kept pouring it on in the fourth quarter until D'Antoni waved the white flag with a little under five minutes left, pulling his starters and beginning preparation for Game 7.

Thompson finished with 35 points on 13-of-23 shooting, including 9-of-14 on 3s. It conjured memories of his playoff-career-high 41-point performance when the Warriors faced elimination in Game 6 of the 2016 West finals against the Oklahoma City Thunder, a series Golden State won in seven games.

Curry had 29 points on 12-of-23 shooting, including 5-of-14 on 3s. He has had a lot of better shooting nights, but he made sure his struggles in the first half (1-of-7 from long range) wouldn't be a storyline he heard about all summer.

The Rockets, who got 32 points and nine assists from Harden, looked like a team that ran out of gas. After hitting 11 of 22 3s in the first half, Houston made only 4 of 17 in the second. The Rockets, one of the elite offensive teams in NBA history, scored only 25 points in 24 minutes after halftime.

Houston has two days to recover and hope Paul can have a medical miracle.

Splash Bros. answer from downtown in the 3rd
Steph Curry and Klay Thompson combine to sink seven 3-pointers in the third quarter.