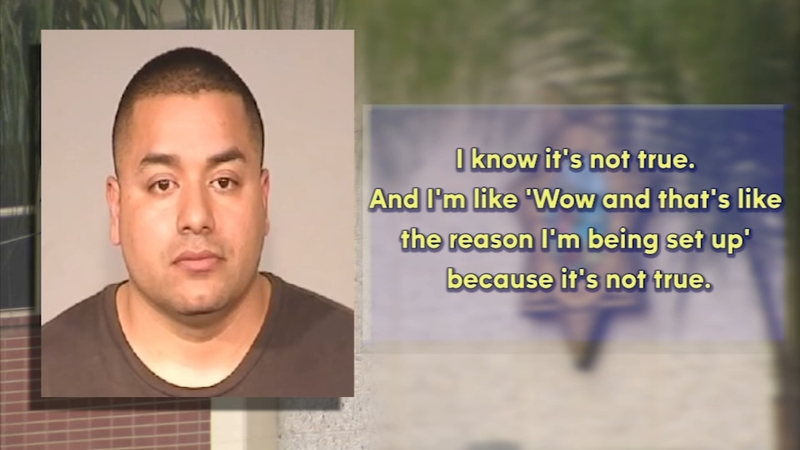 Campos no longer walks a police beat because of the tales he told about a stolen pickup truck he registered in his name at the DMV.

The 2008 Chevy Silverado had a phony VIN to masquerade as a 2011 truck for warranty work, and witnesses told internal affairs investigators Campos knew it was stolen.

Investigators determined he also lied about the cost in a sworn affidavit.

"This would destroy his credibility and he would not be useful as a police officer," said legal analyst Tony Capozzi.

Internal police documents show the stolen truck was just the tip of the iceberg for investigators.

One witness told police "everyone knew Campos had his brother killed."

Police found Jose Guzman dead in a torched truck in a remote Fresno County field back in 2007 -- not long after police raided the home Guzman shared with Campos and seized four pounds of meth.

In a recorded conversation, Campos acknowledged hearing whispers from other officers about his role in the murder as they investigated him for the stolen truck.

"I know it's not true," he told Detective Brad Alcorn while crying. "And I'm like 'Wow and that's like the reason I'm being set up' because it's not true."

The DEA also investigated Campos for ties to the drug trade.

An informant went to the officer's auto repair shop to get a pound of meth.

He told police Campos had a paper bag, but went into a bathroom with another man, who then came out with the bag and exchanged it for $6000. The drugs turned out to be fake, but the deal would still be a felony.

The same investigation led to the stolen truck and the police department fired him in 2015, about a year later.

"We take these allegations and subsequent investigations very seriously, as misconduct by our officers and personnel can erode public trust, which is vital to the success of the Fresno Police Department," said interim Fresno Police Chief Andy Hall.

Prosecutors also took it seriously and charged Campos with auto theft and perjury, but he's never faced charges for drugs or murder.

"I'm sure police are following up and seeing if there are other leads, but at this point it doesn't appear anything else is there and as a result there are no new charges," Capozzi said.

A lot of details from the investigations are still secret, but the city of Fresno gave us thousands of pages of heavily redacted internal affairs documents after Action News submitted a public records request in January

"If that's released to the public and it's in the news media, other people are going to read that," Capozzi said. "Other people are going to see that and they might start getting phone calls coming in from people saying 'hey, I know something about this' and it may lead to further investigations or it may lead to evidence showing he wasn't involved."

Campos is due in court on his criminal case next week. We asked his attorney for a comment, but he chose not to say anything publicly.