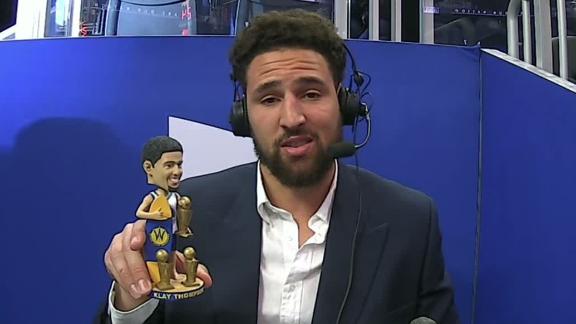 The Utah Jazz will go for their first season-series sweep of the Golden State Warriors in 10 years when the clubs meet Wednesday night in San Francisco.

The records indicate a fourth consecutive victory might seem like a formality for Utah (30-13) over Golden State (10-35), but the most recent two meetings in Salt Lake City were anything but blowouts, with the Jazz winning 113-109 in November and 114-106 in December.

One reason for the competitive efforts by the Warriors has been ex-Jazz swingman Alec Burks, who burned his old mates for 20 and 24 points in his two Utah homecomings.

Burks also came up big in the Warriors' 129-124 overtime loss at Portland on Monday, keeping Golden State in the game with a season-best 33 points along with eight assists and seven rebounds.

Unfortunately for the Warriors, Burks fouled out -- just the third time in his career -- in the final seconds of overtime with Golden State trailing by just one point.

In the end, it was another close loss -- the Warriors' second straight in overtime -- for the NBA's losingest club.

"There are little things that we can fix that might change the way that the game turned out," forward Marquese Chriss said, trying to put a positive spin on the defeat. "All we can do at this point is to learn from it and talk about it and try not to let it happen again."

They've fired offensively on all cylinders against the Warriors in the three earlier head-to-heads, with Donovan Mitchell (27.0), Mike Conley (24.5) and Bojan Bogdanovic (20.3) all averaging more than 20 points against Golden State this season, while Rudy Gobert has gone for 16.0 points and 16.0 rebounds per game.

Utah has rebounded strongly from its most recent loss to New Orleans with blowout home wins over Sacramento (123-101) and Indiana (118-88), and will get two more home games (Dallas and Houston) after the one-day trip to San Francisco.

Gobert noted to reporters after the win Monday that the three keys to beating the Pacers included one that's also important against Golden State -- keeping the opponent off the free-throw line.

The Warriors rank second in the NBA in foul shooting at 81.1 percent

Gobert rolled his left ankle in the fourth quarter against the Pacers. The injury is not considered to be serious, but a matchup with Golden State might give Jazz coach Quin Snyder an opportunity to give his big man a night off with two heavyweight matchups (vs. Dallas and Houston) upcoming.

The Warriors held Draymond Green (flu) and Glenn Robinson III (sprained right ankle) out of the Portland game on Monday. Of the two, Green is the more likely to face the Jazz.

The best of Klay as a sideline reporter
Klay Thompson's gems include a review of his own bobblehead, celebrating his teammates' slick slams and congratulating a newly engaged couple in the stands.
Report a correction or typo
Related topics:
sportsespnutah jazzgolden state warriorsnba
Copyright © 2021 ESPN Internet Ventures. All rights reserved.
More Videos
From CNN Newsource affiliates
TOP STORIES