The new chancellor of California's public university system will end his assignment at Fresno State later this year and begin his new role on January 4th.
KFSN 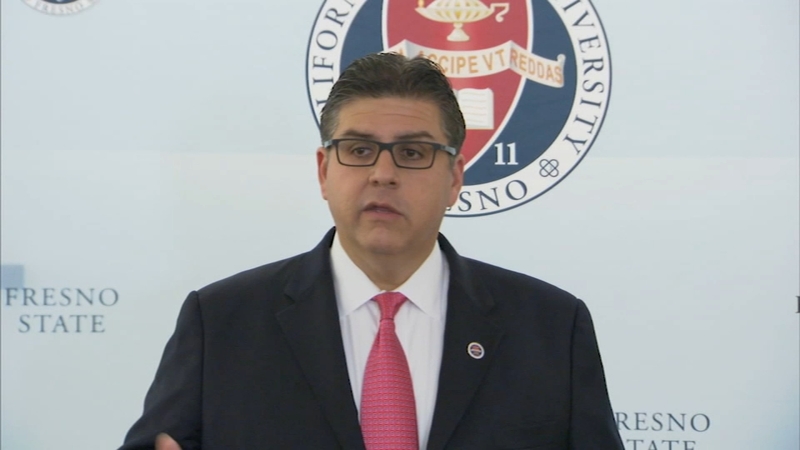 FRESNO, Calif. (KFSN) -- The new chancellor of California's public university system talked about his priorities on Friday and how he plans to improve the educational system at all 23 Cal State campuses

Outgoing Fresno State president Dr. Joseph Castro, a Hanford native, was appointed by the CSU board earlier this week, making him the first Mexican American ever to hold the position.

Dr. Castro got choked up Friday talking about the past seven years at Fresno State and how he plans to use the experience as the top leader of the California State University system.

"I would say the success we've enjoyed together has changed the lives of so many talented and diverse students and the fact that they grew up under circumstances just like my own is really very meaningful," said Castro.

He has a heart for first generation students and those who have faced economic challenges but still pursue a four-year college degree.

As the chancellor, he plans to continue to support undocumented students with resources so they can graduate and become successful and innovative leaders.

"That's really how we're going to lift California even more, in terms of opportunity."

He will oversee close to half a million students who are enrolled in 23 campuses across the state. He knows challenges are ahead. But he is already listening to the presidents at each university to hear what they need at their campus.

He's also reaching out to lawmakers and plans to ask for more funding to improve technology and services to students.

The hurdles that came with a sudden transition to online learning are one example of the resilience that Dr. Castro witnessed - that he believes will help students and faculty become stronger in the future. But he acknowledged the difficulty for many students, including those who had to return to their hometown.

"I want the students out there to know that I empathize with them. If I had to go to Hanford while I was an undergraduate at Berkeley- it would have been very difficult for me to study, if not impossible," said Dr. Castro.

Only a few days into the announcement, he didn't want to get too far ahead of himself in making action plans, but he does intend to look at new technology and more online class options in the future.

He expects to have faculty and students back on campuses if possible by next summer or fall.