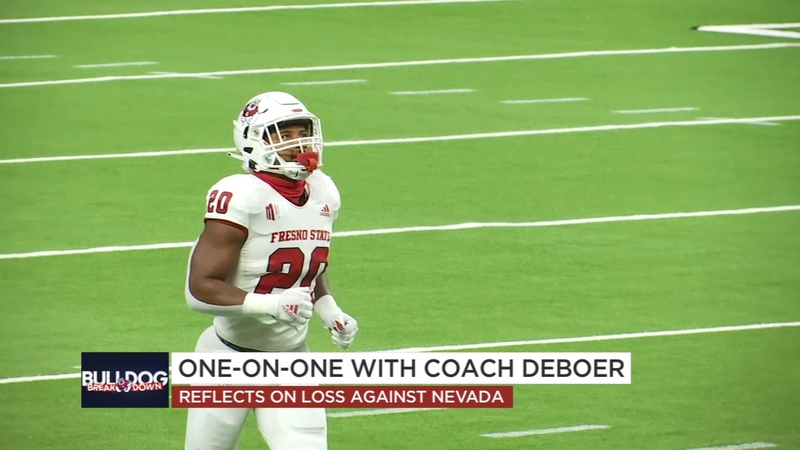 FRESNO, Calif. (KFSN) -- After two weeks off, Fresno State fell to Nevada (6-1) 37-26 in Reno. It was the Bulldogs (3-2) first game since November 14 after games against San Jose State and San Diego State were canceled due to COVID-19 contact tracing within the program.

The loss eliminated FS from contention of playing in the Mountain West title game.

Fresno native Tory Horton scored three touchdowns for Nevada, a career-high, on a night where Ronnie Rivers left with an apparent ankle injury.

The game featured the #1 & #2 offenses in the Mountain West but special teams woes were the story of the first half for FS. Backup punter Carson King bobbled a snap and had a punt blocked which led to good field position for Nevada and resulted in two Wolf Pack touchdowns. Junior quarterback Jake Haener started punting on fourth down midway through the second quarter.

Cesar Silva was also noticeably absent at kicker when Mac Dalena, a freshman wide receiver from San Joaquin Memorial, was in to kick the extra points. He was 2/4 on the night.

FS jumped out to an early lead when Josh Kelly (SJM grad) took a jet sweep nine yards for the Bulldogs first touchdown.

After FS' punting issues, Nevada took a 17-7 lead before Haener ran in a three-yard touchdown on fourth and goal.

The Wolf Pack answered with a 17-yard touchdown from Carson Strong to Valley product Tory Horton (Washington Union HS) to make it 24-14. The Bulldogs responded with a 4-play, 58-yard drive capped by a 19-yard connection from Haener to Keric Wheatfall that kept it a one-score game heading into the break.

After both teams fumbled in the second half, Jordan Mimms was stopped on fourth and 1 at midfield before Brayln Lux would intercept Strong on the ensuing drive.

FS elected to go for it on fourth and goal from the five and after failing to convert, Horton was on the other end of another Strong touchdown pass, this time for 85 yards making it 30-20 Nevada with 13:42 to play.

Washington Union grad Tory Horton having himself a career game his 2nd TD of the night. When I interviewed him at the City/County All-Star game he said he was looking forward to playing Fresno State this year.

Jalen Cropper fumbled on the ensuing kickoff, but Wylan Free came with an interception on the other end, FS' third takeaway of the night. The drive would result in a turnover on downs at Nevada's 36 yard line.

A 32-yard touchdown strike from Strong to Horton led to the third TD of the night for the former Panther and extended the Nevada lead to 37-20. He finished with 5 catches for 148 yards and 3 touchdowns.

Rivers, who entered the game in a tie with Anthony Daigle for the most touchdowns in FS history, left the game after a 66-yard touchdown was called back in the second half. That led to an increase in passing plays and the most throws in a single game for Haener. The junior QB finished the night 41/65 for 485 yards and two touchdowns.