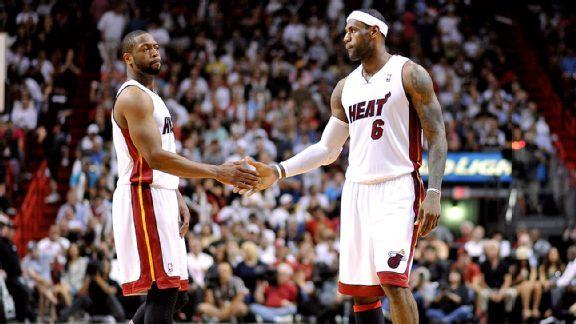 As they prepare for a rematch against the San Antonio Spurs, James and Wade pushed back against the perception that Ray Allen's 3-pointer in Game 6 occurred after some fortunate bounces saved their team's season.

"We feel slighted," James said before the Heat's practice Wednesday. "I can't sit here and lie to you, we do. ... It went seven [games], it wasn't like it was 3-0 and they had us in Game 4 and we took it and won four straight. If you look at the numbers, look at the numbers, the lead changes, the ties and the points in that series, it's almost even."

The Heat trailed by five points with 28.2 seconds left in Game 6 but forced overtime on Allen's shot with five seconds left. They won in overtime and came back to win Game 7 after trailing three times in the series.

Wade says the Spurs won a game on a challenging, clutch shot by Tony Parker in Game 1, but no one considers that lucky.

"Game 6 was unbelievable to be able to come back and win that game," Wade said. "But that's the game of basketball. You know, the ball bounces funny ways. Game 1, the shot that Tony Parker hit, I mean, that was unbelievable, to get off the ground and hit that shot and just get it off.

"The ball bounces in funny ways. And we're thankful for Ray Allen making that shot, but there were so many other things that had to play right for us to win that game. So you need a little luck, both ways, even to be in the Finals. We were a recipient of luck in that [Game 6] moment, but we won the championship."

The Heat seem to be looking for ways to create an edge as they approach Game 1 on Thursday. In the days leading up to their departure for San Antonio, several Heat players have said Tim Duncan's comments that the Spurs intend to beat the Heat this time around were serving as a motivational tool.

On Wednesday, however, James emphasized his respect for Duncan.

"I think he's one of the greatest to ever play our game," James said. "He is still solidifying his legacy at this point, just because in the sense that he's playing at the one of the highest levels of any guy that's played this long. To keep this team and this franchise relevant over 15 years is amazing.

"To see what he does on the floor every single night, and year after year people count him out and count this franchise out, because of this whole old epidemic that we have in sports, just lets you know what type of person and what type of player and passion he has for the game."

James also said just being back in the Finals was motivation enough and that motivation can go only so far.

"How much motivation can carry you to a championship, I'm not sure," he said. "At the end of the day, five, 10 guys on the floor, three refs and one basketball. You gotta make plays. I can't shoot the ball and say motivation will make it in. I can't sit in the lane and take a charge and say, 'Motivation, let me get this call.'

"You have to play the game of basketball and do it the right way and hopefully, you know, you can sit back and say, 'Well, I did everything it took to win. Win, lose or draw, I'm satisfied with it.'"

Right now, both James and Wade seem determined to make sure last season's title is in what they feel is the proper context as they attempt to beat the Spurs again.

"Both teams put themselves in a position to win an NBA championship [last year], and we just happened to make one or two more plays to win it," James said. "At the end of the day, it doesn't take away that we did win last year, but that's last year. Last year is last year and we're excited about it, but this trophy this year belongs to nobody. It's up for grabs."

NBA Finals Edge
Antonio Davis breaks down who has the edge in the NBA Finals rematch between Miami and San Antonio.