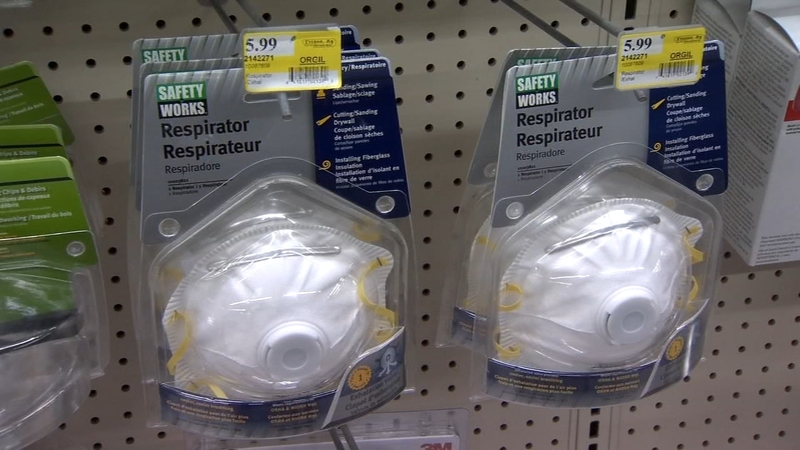 Air quality dangerous for everyone, breathing equal to smoking 7 cigarettes

FRESNO, Calif. (KFSN) -- The air quality is so bad, nobody is immune from ill health effects, especially those with asthma or lung disease. Dr. John Gasman is a pulmonologist at Kaiser Permanente Medical Center in Fresno. He is seeing patients having problems because of the air quality.

"Many of them have to come into their primary care doctor, to me, I met a few in the hospital this weekend because things flared up because of the weather," said Dr. Gasman.

He says while those with existing problems will have it worse, anyone can be impacted by this bad air.

"A healthy person is going to have irritation of the eyes the nose, the throat, nasal drainage cough sneezing some people are going to have very irritated eyes," said Dr. Gasman.

The bad air has created a run on air masks. Ian Williams of Fresno AG Hardware has been selling a lot of maks, or "particulate respirators."

"Any mask is going to be better than no mask but what we recommend is going to be something with a filter on it, this is an OSHA N 95, and it's just a rating of what it filters out and this will pretty much filter out any kind of fine particle that's in the air," said Williams.

Kevin Hall is among those stocking up on masks. He's with the Central Valley Air Quality Commission. He's relying on the latest air pollution information from the Purple Air monitoring network. The network is a nationwide series of air monitors set up by individuals and non-profit groups. Hall says.

"The big advantage of the Purple air monitors is they give up to the minute readings, rather than the air district which takes an hour-long average and then posts that, by email and text 15 or 20 minutes after the hour has passed," said Hall.

But today the Valley Air Districts readings are also off the charts. Hall says you don't have to rely on monitors and charts to know things are bad.

"If we use some of our common sense we can look around and say that's smoke and it smells like smoke is I safe, and the answer is, no you are not," said Hall.

Eleanor Simonsen of Fresno is also buying a mask, for her grandson so he can do some yard work. She has had it with the smoke.

"It's getting hard to take, it really is," said Simonsen.

GENE: She says it's the worst she can recall.

"Not this bad and I've lived here most of my life," said Simonsen.

The App called "Shoot, I Smoke" has used a scientific formula to calculate how the air pollution correlates to cigarette smoking. Based on their formula they calculated breathing the air in Fresno today was like smoking 8.4 cigarettes. The figure for Oakhurst, a foothill community closer to the Ferguson fire was 24 cigarettes. Breathing the air in Oakhurst was like smoking more than a pack a day. There are no indication conditions will change anytime soon.
Report a correction or typo
Copyright © 2022 KFSN-TV. All Rights Reserved.
TOP STORIES
Biden confirms he will nominate first Black woman to SCOTUS
Fresno woman recounts multiple COVID hospitalizations
21-year-old killed in rollover crash in Fresno County
2 killed in motorcycle crash along Hwy 43 in Tulare County
Le Grand woman accused of killing children makes 1st court appearance
Haystack fire burning near Highway 180 in Fresno County
Foggy Day School Schedules, Fog Tracker from ABC30
Show More
Mayor Jerry Dyer responds to One Fresno Foundation allegations
California representative pushing for 4-day workweek in new bill
Spotify says it will grant Neil Young's request to remove music
Here's why your PG&E bill may be higher this winter
CSU considers eliminating SAT, ACT testing as admission requirement
More TOP STORIES News