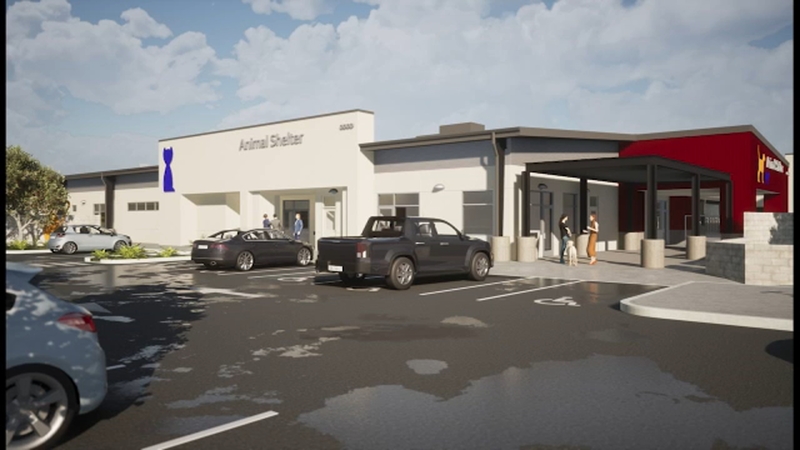 FRESNO, Calif. (KFSN) -- The five acres of land that sits on Airways Drive between Peach and Clovis Avenues will be the new home for the city's new animal shelter.

The Gap Incorporated donated the land back to the city to build the shelter.

This is a rendering of the $22 million state-of-the-art facility with four buildings.

"This is one of the most bipartisan issues," says Fresno City Council President Luis Chavez. "We have Democrats, Republicans, cats, dogs, coming together to make sure we are solving a problem."

"Today, Stitch has a home and it's with my wife Diane and I, and we love him dearly," Dyer said.

City leaders say their goal is to decrease the number of stray animals in the community, to work with local rescue groups to get as many of these animals adopted as soon as possible and into loving homes with one other important goal.

"To dramatically reduce the euthanasia rates that we see for animals in our community," Dyer said. "None of us want to see an animal put to sleep."

The facility will be a full-service, one-stop-shop shelter utilizing these buildings for administration, operations and the sheltering of more than 8,000 dogs and more than 1,000 cats.

Right now, the city still has the contract in place with the Central California SPCA for animal control services.

However, the mayor says they are still working out the details for who will officially operate the shelter.

The mastermind behind this plan is Bredefeld.

He and his wife have Coco and Zoe, who are also rescues, so he says it's important for the entire Fresno community to get involved.

"We are going to be running a first-class facility and any financial support or any other type of support that the community wants to provide, we are open to it," he said. "We are just providing this so they can help us, help them and help the entire community."
Report a correction or typo
Related topics:
societyfresnoanimal
Copyright © 2021 KFSN-TV. All Rights Reserved.
TOP STORIES
Cause of death to be released in case of family found on hiking trail
Driver found dead inside crashed car, detectives investigating
Remains found at park in search for Brian Laundrie; not clear if human
Storm to move through Central CA this week. What to expect
Kristin Smart case: Paul and Ruben Flores to stand trial next April
White House details plan to roll out COVID vaccines for younger kids
Americans arrested for trying to board flight in Switzerland
Show More
Man killed in single-car crash in Fresno County, CHP says
Yosemite Lakes Park arsonist Kenneth Jackson out on parole
Family remembers 82-year-old man shot and killed in Fresno County
US expected to authorize Moderna, J&J boosters as soon as today
Nikolas Cruz pleaded guilty to murder in 2018 Parkland massacre
More TOP STORIES News