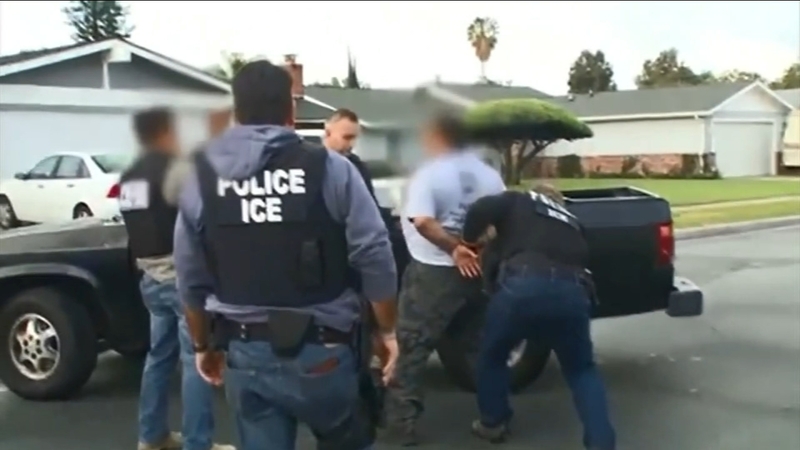 Authorities call for changes to SB54 after Tulare County rampage

TULARE, Calif. (KFSN) -- Tulare County Sheriff Mike Boudreaux says his department received a detainer request from ICE on Gustavo Garcia about an hour before they released him from the Tulare County Pre-Trial Facility last Friday.

But they couldn't honor ICE's request, because under Senate Bill 54, commonly referred to as California's sanctuary state law, state law enforcement agencies cannot detain an individual on the basis of a hold request.

The law does allow law enforcement to cooperate with immigration authorities under certain circumstances, including past serious or violent felonies, but the sheriff says the language of the law is contradictory when it comes to Garcia's armed robbery conviction more than 15 years ago.

Regardless, he says his employees weren't legally allowed to look up Garcia's criminal record, because they didn't have a reason to - he was being held on a misdemeanor charge.

It wasn't until after Garcia's crime spree and death that the sheriff says his office started to learn of his lengthy rap sheet.

Assemblymember Jim Patterson believes Sheriff Boudreaux should have been able to communicate with ICE to make a public safety decision on whether to hold or release Garcia, but says he did not have that ability under SB54 as it stands.

"What we think we're discovering is that the law presently unnecessarily puts a wall between the sheriff and ICE to determine not whether we're going to turn them over to ICE or if we're going to do something with them but to determine, are they a danger to society?" Patterson said. "Do they have a criminal record that would indicate that it would be dangerous to let them go and should we detain them and inform ICE?"

Patterson will continue to research the issue, but he proposes Democrats in Sacramento take a closer look too.

He says without their support, no change will come.

On Wednesday, ICE said Garcia's rampage could have been avoided if they had been notified of his release.

This evening, ICE out of California also released a statement, which says ICE should not politicize the tragedy in Tulare County.

"As we wait for further details about the causes of this tragic spree, it is clear that we must come together to work toward solutions that address issues like gun violence. The California Values Act, in fact, is part of the solution, helping victims and witnesses work with law enforcement and also preventing abuses. It is short-sighted for the Sheriff to attack it."
Report a correction or typo
Related topics:
tularetulare countyfresnosan joaquinimmigration reformsanctuary citiescrimeshootingshooting rampageimmigration
Copyright © 2022 KFSN-TV. All Rights Reserved.
IMMIGRATION
Newsom discusses expanding health care to all Californians
Biden: Families separated at border under Trump deserve compensation
Smuggler carries girl over border wall, abandons her in California
Fresno State hosting discussion on immigration, customs enforcement
TOP STORIES
Man pleads not guilty to murdering brother-in-law on Christmas Eve
Some Valley hospitals postpone 'elective' surgeries due to COVID surge
Man who admitted killing dog to Fresno police facing more accusations
Man charged with murder of 2-year-old whose father died a year earlier
24-year-old man shot in central Fresno, police say
43-year-old man stabbed in northwest Fresno, police say
How reliable are rapid tests? Dr. explains when to depend on results
Show More
Is there home appraisal bias in Fresno? Professionals weigh in
Housing Watch: Million-dollar homes at Ventana Hills in Fresno County
Good Sports: Fresno woman gains recognition with indoor rowing
Valley ag business continues to feel impact of supply chain issues
Family of 5 displaced after house fire in southwest Fresno
More TOP STORIES News