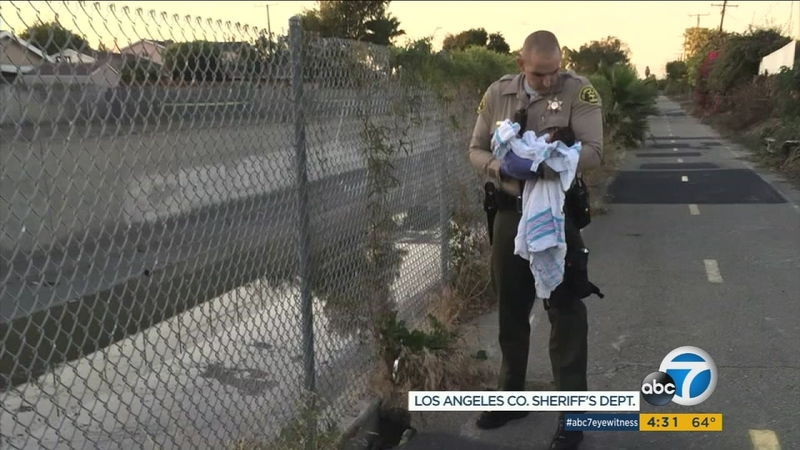 Deputy who rescued baby out of Compton hole speaks

COMPTON, Calif. -- It's a day a Los Angeles County Sheriff's deputy will surely never forget, when he dug a baby girl out of a hole in Compton and rescued her.

Deputy Adam Collette had only been with the sheriff's department for about a year when he responded to a call the day after Thanksgiving.

"My first thought was maybe, you know, maybe an animal stuck in the fence or had fallen over and then when we get closer. We're at the scene and they're telling us, 'we hear it around here.' That's when I could start to hear the cry," Collette said.

Collette, who is also a father, said he didn't believe he'd actually find a baby inside a 2 feet wide hole in the ground covered in loose dirt and two large pieces of asphalt.

"As we get down, we're getting closer to the sound, pulling the asphalt chunks off to the side, (I thought) it's not going to be a baby. And as I soon as I saw the blanket I was like, 'oh wow, it's a baby," Collette said.

Doctors said the newborn could have been there for hours, but survived.

"It was a miracle," Collette said. "I think there's a touch of God in that hand as well."

Detective Jennifer Valenzuela was working overtime with the sheriff's department Friday afternoon and witnessed the rescue.

"Since I've followed her from the beginning and I do visit her in the hospital, and keep up with her, I call her Baby Grace, just for the sheer fact that she had that will to live," Valenzuela said.

Authorities are urging the baby's mother to come forward as they're also concerned for her well-being.

"In this case, we're extremely lucky two women heard the baby and happened to pass by. If they were not alert or had not called for help, we may have lost this precious life," Sheriff Jim McDonnell said.

Evangelina McCrary, of Compton, is one of the women who first heard the baby's cries while taking a walk.

McCrary said she prays God blesses the baby and that she finds a loving family.