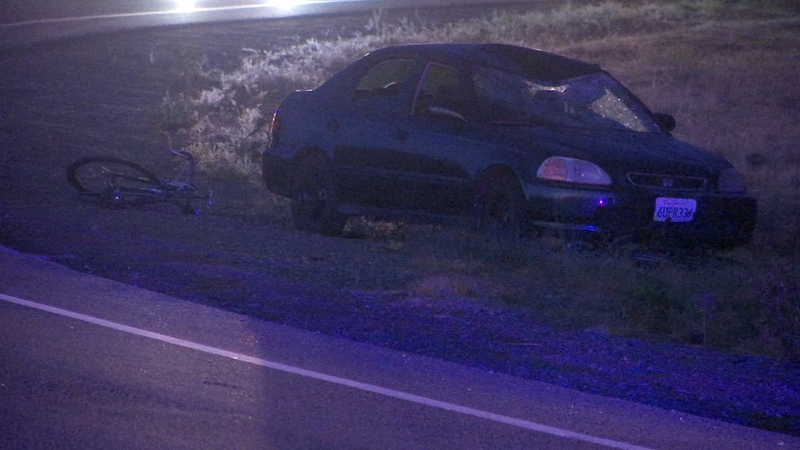 2 bicyclists hospitalized in Fresno County after crash with car

FRESNO COUNTY, Calif. (KFSN) -- UPDATE: Madera Police said on Wednesday one of the two bicyclists injured is an officer with their department.

The California Highway Patrol said two bicyclists have been seriously injured after being hit by a car in Fresno County.

The crash occurred on N Friant Road and Millerton Road at about 6:20 pm on Tuesday.
The CHP responded to a call just before 6:30 on Tuesday evening of a vehicle hitting two bicyclists near Millerton Lake.

The pair of cyclists were riding east on Millerton Road when the driver of a Honda Civic traveling west lost control and drifted onto the shoulder of the road, hitting the two cyclists head-on.

Both men were taken to a local hospital with major to critical injuries.

Family members told Action News the pair suffered concussions and one may have an orbital fracture.

The driver and three passengers inside were not injured.

CHP officers do not believe drugs or alcohol were a factor but speed or distracted driving may have played a role.
Officers offered a reminder to drivers.

"Just make sure you are attentive to your driving. Put down those cell phones and just limit those distractions. You just never know what you're going to face when you come around these corners, up these hills," said CHP spokesperson Mike Salas.

That particular stretch of roadway is popular among cyclists, especially as the weather improves.

"Just as a reminder, these bicyclists that are out here - share the road with them, give them space; if it's at all possible, move over. There is the 'move over' law which does require the driver to move over at least three feet, if possible," added Salas.

Salas said the victims were wearing helmets at the time of the crash, and both are expected to survive.