Visalia Unified's partnership with the college comes after the signs were torn down from El Diamante High School last week.
KFSN
By Brian Johnson 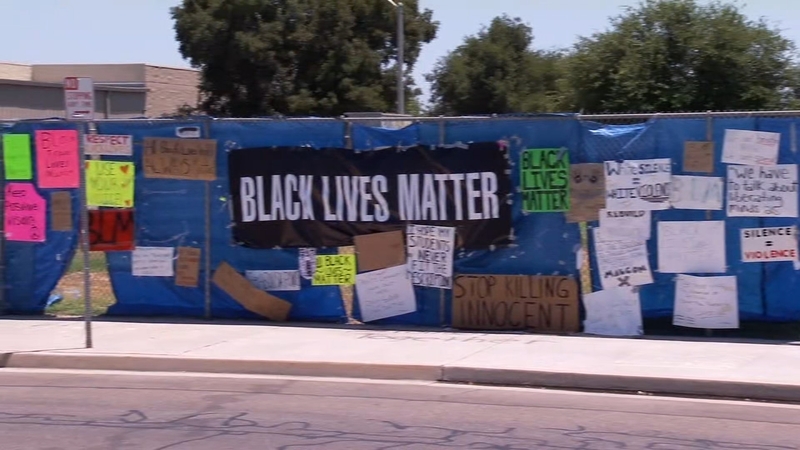 VISALIA, Calif. (KFSN) -- From the very beginning, some people in Visalia have had a problem with the signs posted on El Diamante High School's fence, signs in support of and associated with the Black Lives Matter movement.

Last week, a group of women were caught on camera tearing them all down.

RELATED: Videos show group of women taking down Black Lives Matter signs in Visalia
One of them pointed a pair of scissors at a recent El Diamante graduate.

Over the weekend, another video surfaced of a man ripping signs from the fence before being confronted.

"It's sad to see that we have adults within our community who in their disapproval didn't unfortunately model the way in which things should be handled," said VUSD Administrator of Equity and Student Services Brandon Gridiron.

Gridiron has spent time with students at the fence.

Some have flown the Confederate flag.

On Monday, the district said the signs would be removed for the safety of their students.

Later, they announced that the signs could be relocated to a parking lot at College of the Sequoias.

They'll be up until August 10th.

"As a father, I tell myself, 'If I don't feel my children would be safe out here, and as an educator, I can't allow our students to be there either'," Gridiron said. "And so we had to make a difficult decision between student safety and student voice, and this has nothing to do with silencing their voice. It has everything to do with ensuring their safety."

This week, the district also hosted a student forum about racism and social injustice.

Visalia's police chief was there.

Gridiron says there will be more forums to come.

But in the meantime, he says the district stands with the students and their message.

"But I don't want them to feel that they're stuck at the fence and that's where change is going to occur," Gridiron said. "I want to help educate our students to understand how change happens and have them apart of the process."