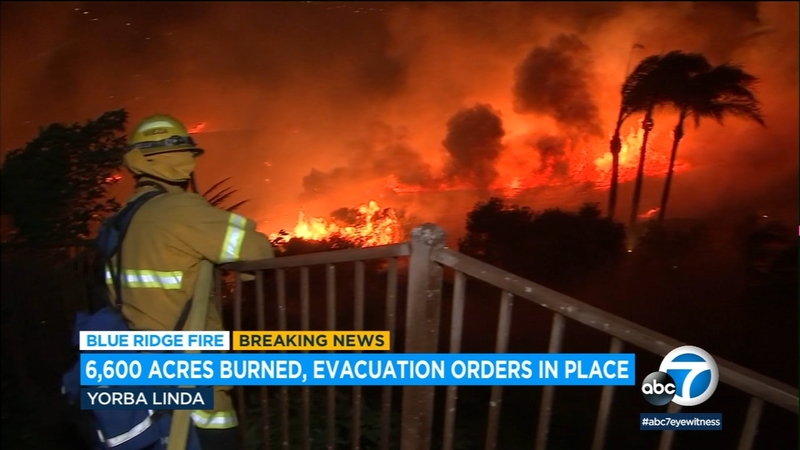 At least one single-family home was seen damaged from flames. The blaze approached within less than 100 feet of other homes.

Flames damage large home at the end of Blue Ridge Dr. in #YorbaLinda but crews were able to save dozens of others as #BlueRidgeFire continues to rage out of control. pic.twitter.com/V2vwASOq1Q

Evacuation orders were issued for Yorba Linda neighborhoods, according to the Orange County Sheriff's Department.

"Anyone in the affected area should evacuate immediately," the OCSD tweeted.

The sheriff's department estimated about 4,000 properties, with 10,000 people, were evacuated but OCFA officials did not say how many homes were under mandatory evacuation.

Firefighters were seen going through those neighborhoods telling residents to evacuate. Most packed up their things and left the area.

"This is apocalyptic," said neighborhood resident Gabriel Sanchez. "The skies are turning a different color orange. It's frightening. My daughter was so frightened. I'm glad she's safe now."

A few residents chose to stay behind, even grabbing shovels themselves to help put out smaller spot fires that were breaking out on a hillside behind their neighborhood.

The fire broke out on a day of intense Santa Ana winds throughout Southern California that triggered a red-flag warning for the area. Other fires around the region, particularly in Orange County have spread rapidly and some areas are seeing gusts in excess of 50 mph. Temperatures are cool, but humidity is very low in the brush.

Please note the map may take some time to load. The map can also be seen at this link.

Authorities had not yet established an evacuation shelter but said small animals could be brought to OC Animal Care Services, 1630 Victoria Road, Tustin.