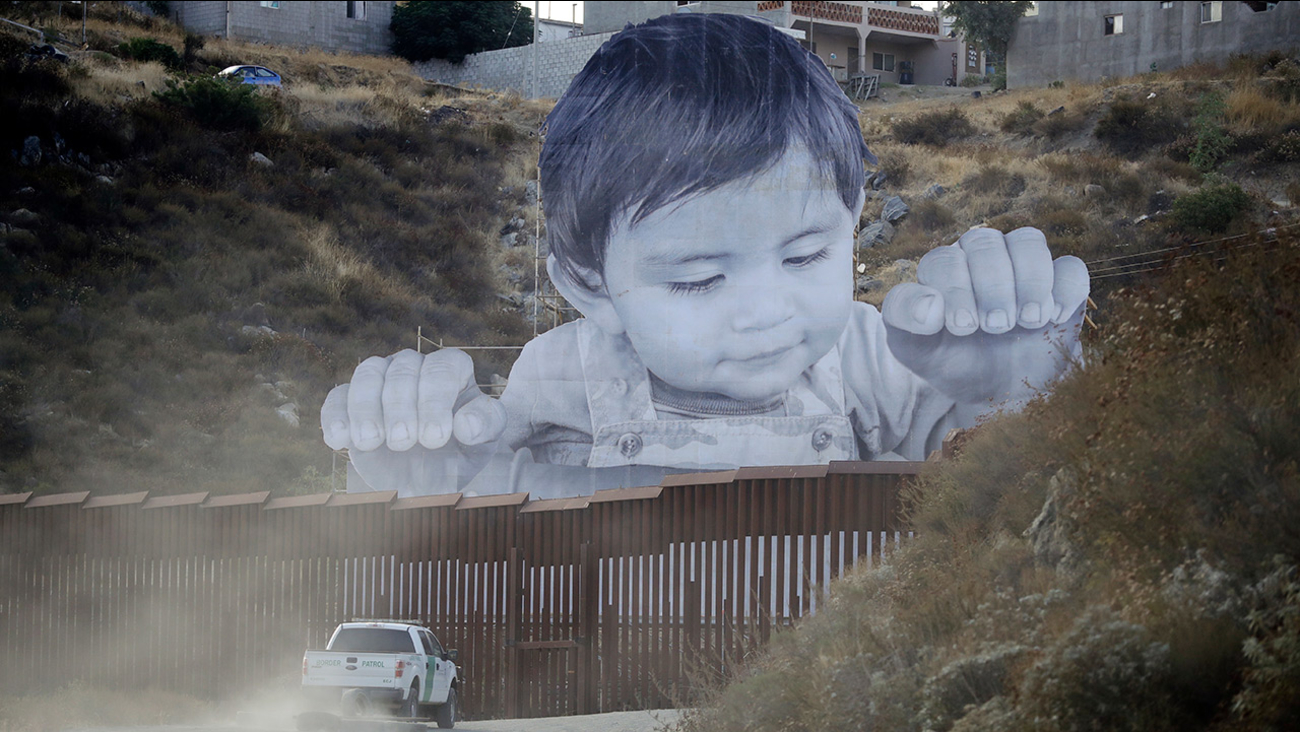 A Border Patrol vehicle drives in front of a mural in Tecate, Mexico, just beyond a border structure Friday, Sept. 8, 2017, in Tecate, Calif. (AP Photo/Gregory Bull)

TECATE, Calif. -- A photo of a giant toddler stands in Mexico and peers over a steel wall dividing the country from the U.S.

The boy appears to grip the barrier with his fingers, leaving the impression the entire thing could be toppled with a giggle.

A French artist who goes by the moniker "JR" erected the cut-out of the boy that stands 65 feet (20 meters) tall and is meant to prompt discussion of immigration.

On Friday, a steady stream of people drove to the remote section of wall near the Tecate border crossing, about 40 miles (64 kilometers) southeast of San Diego. Border Patrol agents warned visitors to keep the dirt road clear for their patrols and not pass anything through the fence.

Edmond Davantes, a software developer from Carlsbad, California, took photos from the U.S. side.

"It's larger than life," he said. "It just draws attention to the whole issue in a positive way."

On the Mexican side, families scrambled down a scrubby hillside to take selfies with the artwork. Children in school uniforms played tag under the scaffolding holding the photo.

People on each side of the wall waved to each other.

Salma Montoya, 18, took a bus to Tecate to see it. She said the town is abuzz about the artwork.

"It's beautiful," she said.

JR has done other large-scale portraits around the world, with much of his recent work focused on immigrants and refugees.

He told reporters at Wednesday's unveiling of the portrait of the 1-year-old named Kikito, who lives in Tecate, that he was spurred by a dream in which he imagined a kid looking over the border wall.

"And when I woke up, I wondered: 'What was he thinking?'" he said. "Like for us we know the implication, what it represents, how it divides, but for a kid, I didn't have the answer."

The artwork went up the same week President Donald Trump said he would end a program that has allowed young immigrants who were brought to America illegally as children to remain in the country.

The administration also accepted more proposals for its plans to build a continuous wall along the nearly 2,000-mile border.

JR said he did not intend for the project in Tecate to coincide with the news about the young immigrants program.

Instead, he said it is part of his long-term work to highlight the "Ellis Islands of today," which has taken him from the shores of Italy where migrants have been arriving by boat from Africa to the California desert.

"Now as an artist I think that it's amazing that the piece arrived at a moment when it creates more dialogue," he said. "Because the idea itself is to raise more questions."

For artists and activists, the 650 miles of existing wall and fencing between the U.S. and Mexico has long been a blank canvas.

Musicians have played simultaneously on both sides. A giant wooden Trojan-style horse was once parked near a crossing in Tijuana. There have been volleyball games and church services held simultaneously on each side of the border.

Sections of wall on the Mexican side are painted with everything from butterflies to an upside-down American flag.

The huge photograph of the boy was pasted onto scaffolding.

JR has erected other large-scale portraits in the slums of Paris, hung them from the top of buildings in Rio de Janeiro during the Olympics, and set up giant photo booths from Israel and Palestine to the United States.