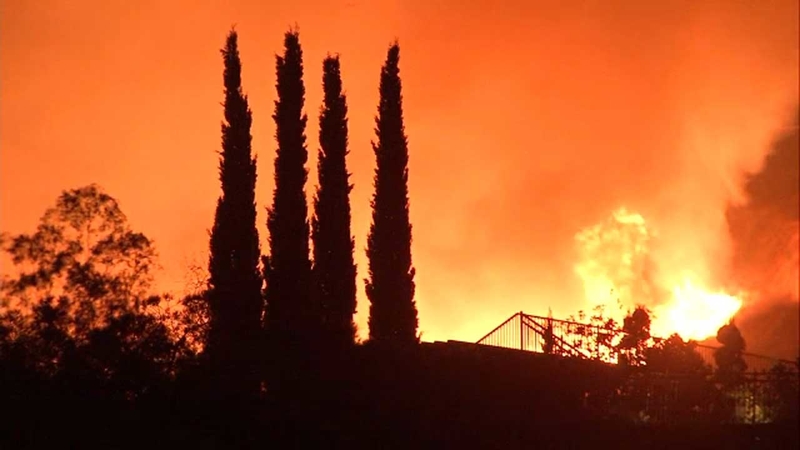 LOS ANGELES -- Fires continued to ravage Southern California and thousands were forced to evacuate after multiple brush fires erupted across the Southland on Thursday.

SANTA PAULA/MARIA FIRE: A fast-moving brush fire broke out near Santa Paula in Ventura County Thursday evening and quickly exploded to nearly 4,000 acres as it threatened thousands of homes in the area. >> Click here for the full story.

SAN BERNARDINO/HILLSIDE FIRE: An intense blaze broke out in San Bernardino early Thursday morning and spread to over 200 acres with winds carrying the flames. Multiple homes were seen damaged. >> Click here for the full story.

FULLERTON/CASTLEWOOD FIRE: An 11-acre brush fire that was threatening homes erupted in Fullerton Wednesday evening, prompting evacuations in the area before it was fully contained Thursday morning. >> Click here for the full story.

SIMI VALLEY/EASY FIRE: A fast-moving vegetation fire erupted on the hillsides above Simi Valley near Ronald Reagan Presidential Library amid extreme red-flag conditions, prompting evacuation orders and school closures as it exploded to more than 1,400 acres. It is 5 percent contained.

Firefighters raced to protect the Reagan Library as a thin wall of flames approached from a nearby hillside. The facility was closed Wednesday. >> Click here for the full story

GETTY FIRE: The fire erupted on a hill around 1:30 a.m. Monday adjacent to the 405 Freeway at Getty Center Drive near the Getty Center museum. It scorched 745 acres by Friday, when all mandatory evacuations were lifted.

The blaze was sparked when high winds carried a tree branch from outside of a brush clearance zone into a city power line, officials said. >> Click here for the full story

If there's time, here is a list of essentials to take with you during a wildfire evacuation. Above all else, follow instructions given and get out of harm's way.

TICK FIRE: All evacuation orders have been lifted for the Tick Fire as firefighters in Santa Clarita battle the 4,615-acre blaze, which is now reported to be fully contained. >> Click here for the full story

DEXTER FIRE: The Dexter Fire broke out in downtown Riverside around noon near the Indian Hill Road and Ladera Lane. Evacuations were lifted around 4:15 p.m. Wednesday afternoon. >> Click here for the full story

Another round of Santa Ana winds, with conditions not seen in the region since 2007, swept through the Southland Wednesday. Forecasters say it could be the strongest wind event of the season. >> Click here to see the full forecast

Nearly 38,000 Southern California Edison customers across the Southland were without power Wednesday as the utility preemptively shut off electricity and considered turning off services for more than 304,000 others to reduce the risk of fire. >> See if your area will be impacted here

RELATED: Most destructive California wildfires in history
RELATED: What's in wildfire smoke? How it can impact your health
RELATED: Everything to know about red flame retardant dropped during wildfires

Dust masks, bandanas and pieces of cloth won't adequately protect you from inhaling fine particulate matter. Instead, look for an N95 or N100 mask.