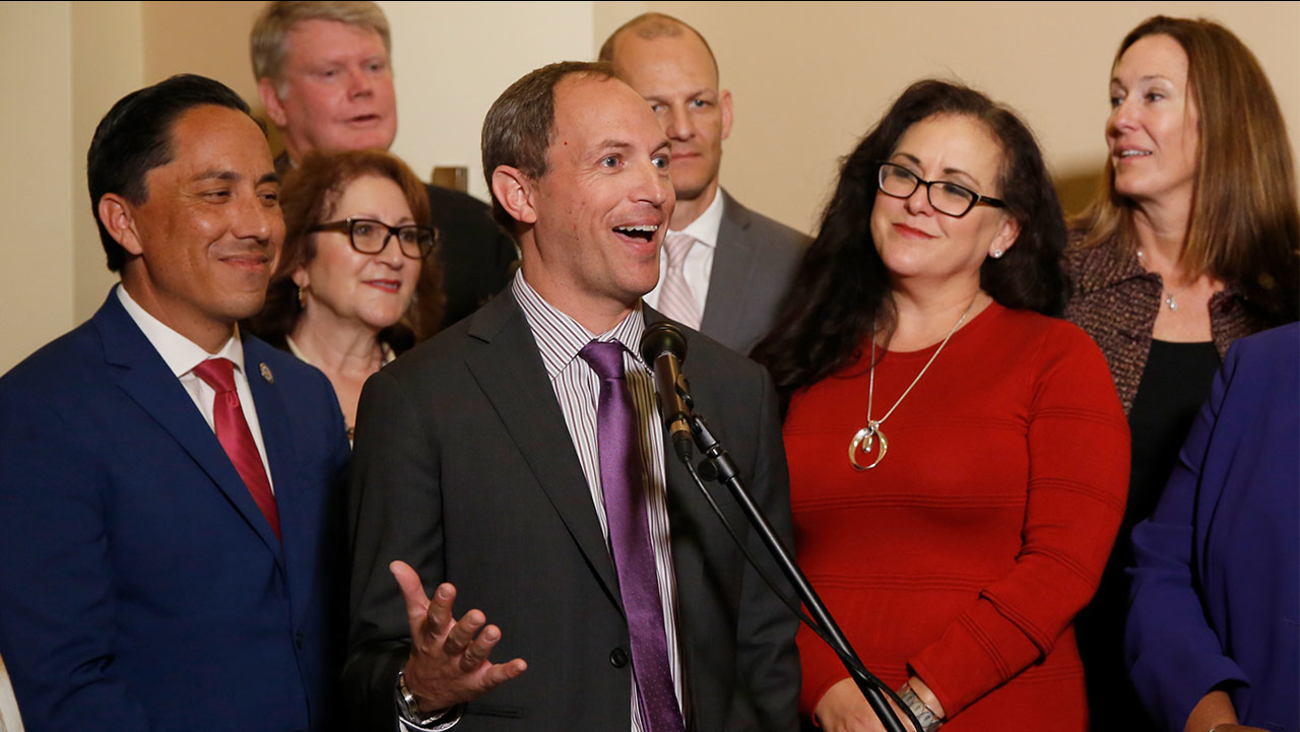 Assemblyman Brian Maienschein, center, discusses his decision to switch party registration from Republican to Democrat at a news conference while flanked by other Democrats. (AP Photo/Rich Pedroncelli)

SACRAMENTO, Calif. -- A moderate California Republican state lawmaker switched parties Thursday while criticizing the policies and leadership of President Donald Trump, whom he said has led the party "to the extreme."

Assemblyman Brian Maienschein said he and the Republican Party have moved in different directions since he was first elected in 2012.

He represents the border city of San Diego and said he differs with the Republican Party on immigration as well as health care, gun control, abortion and gay rights.

Maienschein said he has been a Republican all his adult life, but is changing in part because "Donald Trump has led the Republican Party to the extreme on issues that divide our country."

"As the Republican Party has drifted further right, I and my votes have shifted to the left," he added. "Over the years I've often been at odds with the Republican Party, and even when the GOP disrespected and ignored me, I crossed the aisle to vote for my values."

He has voted with Democrats particularly on environmental and human services legislation. Democratic Assembly Speaker Anthony Rendon of Lakewood praised Maienschein for holding views "that are consistent with the majority of Californians."

His defection gives Democrats 61 votes in the 80-member Assembly, well over the supermajority they need to increase taxes, overturn vetoes and take other actions without Republican votes.

Maienschein won re-election by 607 votes - less than half a percentage point - in November. Assembly Republican Leader Marie Waldron, who represents the city of Escondido near San Diego, accused him of switching parties for political expediency.

Maienschein decided "his political future depended on becoming a turncoat," she said in a statement accusing him of "running away from the fight."

She added: "Unfortunately some people run for office simply because they want a job, regardless of political philosophy."

Maienschein's 77th Assembly District has become more Democratic since his first election, when it was considered a safe Republican district. Republicans had 38 percent of registered voters to Democrats' 30 percent in 2012. Democrats now have 32 percent of voters to Republicans' 31 percent.

His switch further isolates Republicans, who have their strongest support in rural areas of California. Republicans lost another coastal San Diego County Assembly seat in November's election, leaving them with four San Diego area Assembly and Senate seats, including Waldron's.