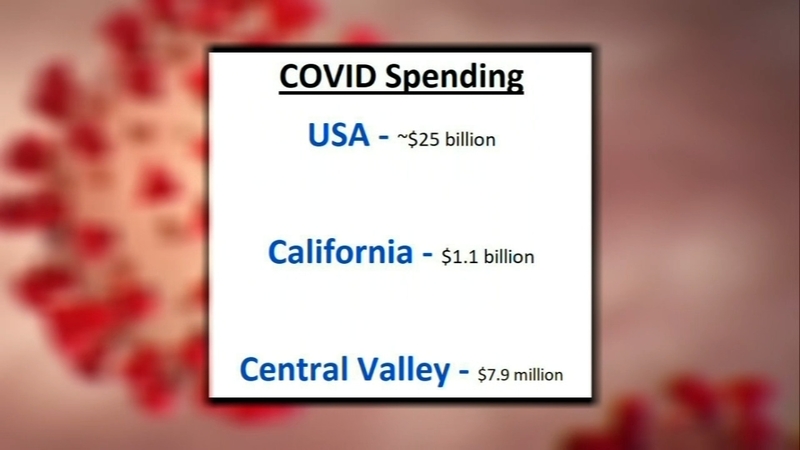 FRESNO, Calif. (KFSN) -- The federal government has spent more than $25 billion so far in a scramble to get everything this country needs during the coronavirus crisis.

Uncle Sam ramped up the response to coronavirus with huge spending.

From mundane items like septic services to a massive new budget for personal protective equipment, an ABC News data journalism team analysis shows the federal government has signed COVID-related contracts worth about $25 billion.

About $1.1 billion of it has come to California, but my analysis uncovered only $7.9 million - in 19 contracts - to the Central Valley.

"My initial reaction was that I'm not surprised," said Fresno City Council Member Luis Chavez. "Parts of the state like Southern California really have a lot of lobbying power."

Chavez has experience in the logistics business and he's seen the difference political clout can make.

The federal COVID contracts look like more of the same to him.

"I think it's on par with the trend we've seen of the Central Valley being left behind," Chavez said.

Even in agriculture, where the Valley leads the nation, the government isn't looking here for much of its more than $400 million in COVID-coded spending.

Sun-Maid and Sierra Sun have also gotten ag contracts for less than $800,000 each.

Elsewhere, Blackbird Industries got about $300,000 to do deep cleaning at the VA. The Fresno American Indian Health Project got three contracts worth about $859,000.

Alma Alvarez got $54,000 for septic services. And Mariposa Portable Sanitation has gotten three contracts for leasing toiletry equipment totaling about $18,000.

But all told, the Central Valley has gotten $4 per person in federal COVID contracts while the state of California has gotten $28, seven times as much.

Chavez says political clout is number one, but another part of the problem is the lack of infrastructure.

He says the region needs to invest in getting businesses ready to mass produce necessities like PPE.

"We know there's going to be a second wave of COVID in the fall and hopefully it's not as bad as it's been, but how great would it be to have local companies provide us with those much-needed supplies that we need to combat this pandemic?" Chavez said.

Not all of the federal contracts end well.

A Bay Area vodka and tech company missed its June 1 deadline to deliver the $48.8 million worth of N95 masks it promised.

But the Valley's biggest contract is a done deal, according to Sarah Bailey at RJB Produce.