The parking lot of Ace Hardware in Prather is now serving as the new site where donations will be collected and distributed.
KFSN
By Alyssa Flores 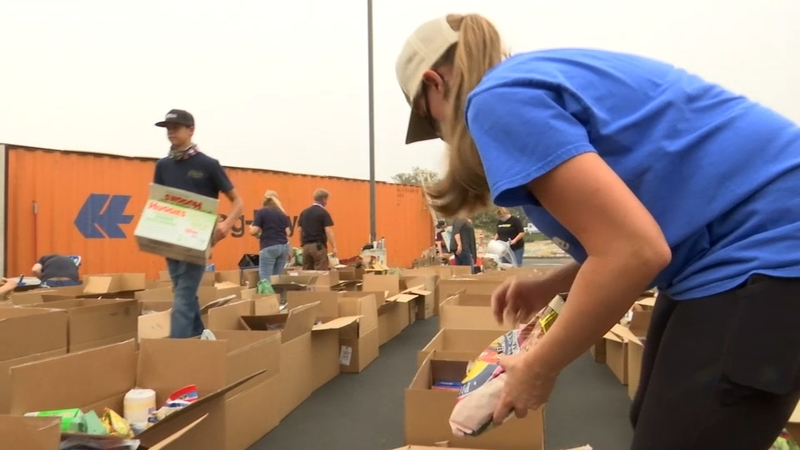 CLOVIS, Calif. (KFSN) -- Since the Creek Fire began forcing people out of their homes, Clovis Hills Community Church has served as one of the busiest donation sites in the Valley.

But the donation bins once filled to the brim at Clovis Hills Community Church are now empty.

The essential supplies are in the hands of Creek Fire evacuees.

The Clovis church's donation center has now moved to Ace Hardware in Prather, closer to families who've been impacted by the devastating fire. It will serve as the new site where donations will be collected and distributed.

"It will be right there at the base of where all those evacuations happened. Where people's homes have burned down," said Beaty. "It's just a better spot for people for the long term."

On Friday morning, the church passed along remaining donated supplies to the organizers set up at in Prather.

In a ceremonial passing of the baton, Pastor Shawn Beaty handed off the torch to Auberry resident Justice Jones.

"We came to a point where we are able to catch our breath- the air is clean a little bit and then we needed to take care of our community and so we were able to literally move things up," said Jones.

Seamlessly the work continued, only now in the Ace Hardware parking lot, to fill food boxes for people who live in mountain areas where the Creek Fire tore through.

"We feel for the folks that lost their homes," said Jones, "But there's a greater population that were evacuated and they are coming home after no power to rotten refrigerators."

Producers Dairy donated a truckload of milk and JD Food helped with hauling the food from Clovis Hills up to the new location. Sierra Unified School District and the Sierra Foundation will now take over the collection and passing out of items.

"What I learned is that metaphor of 'cut fence', that's what we do whenever there's struggle. We all cut fence and come together as a mountain community and we are mountain strong together," said Sierra Unified Superintendent Alan Harris.

Fresno County Supervisor Nathan Magsig also came out to thank the hundreds of volunteers who continue showing up to help their neighbors in need.

"And I want to say thank you for the lives that you have touched, helping to rebuild their lives and giving them a place to stay when they didn't have a place to go," said Magsig.

The distribution center will be at the hardware store parking lot for about a week and then will hopefully be relocated up higher to the Shaver area as conditions allow.

"It's just been an honor, and we will continue to work with you guys and we look forward to helping you guys rebuild. God Bless you," said Pastor Beaty.

Some of the donated supplies from the Clovis Hills Community Church were also sent to a third location, for Creek Fire evacuees being housed in the South Valley.

"They are having to drive an hour to this distribution center to get stuff, so we partnered with Rise Church Visalia," said Beaty.

The church is also a resource for people who evacuated the SQF Complex Fire. After weeks of seeing the needs of evacuees, a donation that Pastor Shawn recommends: gas gift cards.

Donation directly to the Red Cross are another way to give back. ABC news stations across the West Coast teamed up for a Day of Giving, raising over $500,000 for evacuee families who still need relief and will soon face recovery.

"They may need temporary housing. They may need permanent housing," said Cindy Huge from the American Red Cross. "Our caseworkers work one on one with these persons or families confidentially to make their recovery plan."