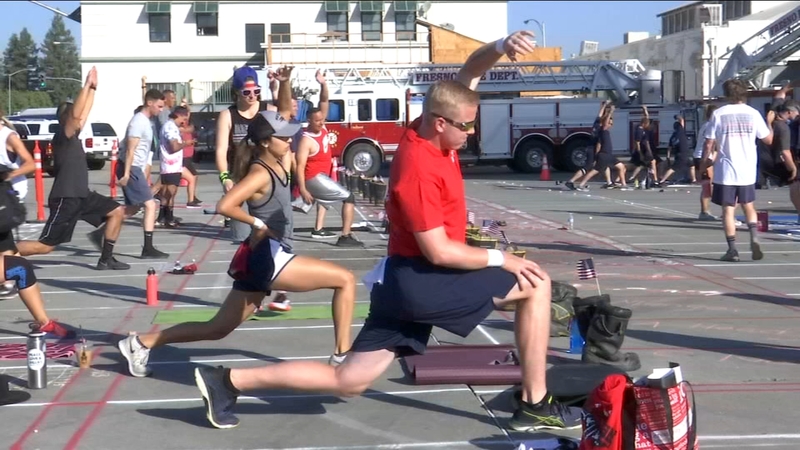 FRESNO, Calif. (KFSN) -- There were several 9/11 tributes and ceremonies across the Valley to honor those who died.

The Fresno Fire Department has their own way of honoring the firefighters who never made it home.

Joella Garcia, who is a captain with the fire department, said that the year after 9/11 they started a burpee challenge, 343 burpees for the 343 firefighters who died.

"For me, it's just a personal mission because it's something I never want to forget," Garcia said.

For several years the challenge was only for firefighters but Garcia opened it up to the public last year.

This year their mission to never forget continued and was more important than ever.

"I feel like everything is just so rough and everything is just so in the air. There's so much negativity out there right now. We need something to hold on to, something to bring us back to our roots like this is who we are. We are Americans, we are people of every culture. We need to be together and this is a perfect way of doing it," said Garcia.

Before the challenge started they held a moment of silence. Over 100 people, including firefighters, took on the challenge.

Denesse Segura was the first to finish, she signed up with her cross-fit gym.

"I think it's important to support and also to remember events like that and come out and support and show our love to them," Segura explained.

Friends and family cheered on the challengers as they pushed through the muscle aches.

There were even some kids trying to be just like their parents, hopping in and doing a burpee or two.

Garcia explained she's glad to see young kids out at the event.

"To see kids starting to ask questions we as adults and parents are put in a position, wow we got to start explaining this. So to see the kids out here actually involved and seeing what we are doing I think is invaluable and is something we can never replace," she said.

Participants came together to help one another to finish the challenge.

Garcia hopes that next year 343 people sign up. She even called out all local fire and police agencies.

"Let's make it PD, CHP, Fresno Fire, Clovis, Madera, Tulare, you are all there," she said. "EMS showed everybody up there year American Ambulance huge shout out to them".