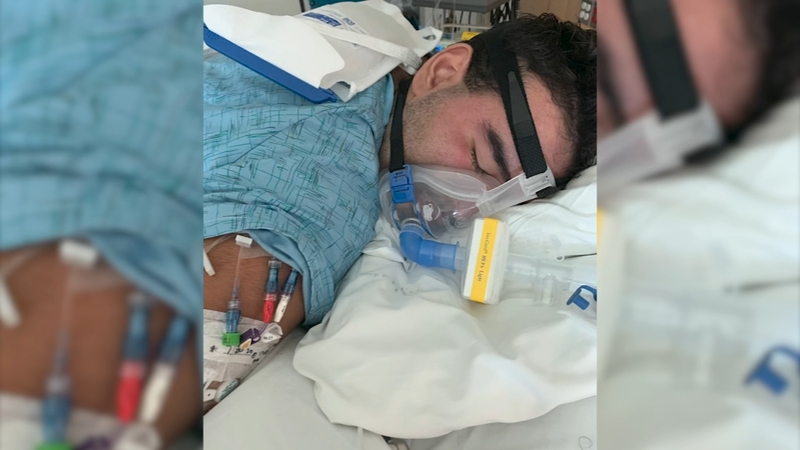 FRESNO, Calif. (KFSN) -- Joanique Quintana says no mother should ever have to see her child like this.

"The noises he would make trying to reach for a breath were horrifying," she said.

Her 16-year-old son, Frankie, remains bound to a bed and hooked up to a ventilator at Valley Children's Hospital.

This has been his reality for the last week, fighting the coronavirus.

"As a mother, it absolutely kills me," she said.

Quintana doesn't understand how or why it hit her son the way it did. He was healthy, active and didn't have any pre-existing conditions.

"It hit him so hard where it brought him down to his knees," she said. "This big strong kid."

Quintana said as her son's health declined, his lungs started to fail him.

"He literally looked like a fish out of water," she said. "He was gasping for air."

A recent convalescent plasma infusion has given Frankie and his family new hope.

He's still in the hospital, but he's breathing much better now and speaking has become easier.

"If Frankie didn't have the plasma, I don't know what shape he would have been in right now. I really don't," she said.

While the treatment is helping Frankie, officials at the Central California Blood Center say they need more plasma to treat others.

Demand is high but unfortunately, they're only averaging about 10 donors per week.

"We're seeing a huge increase now, but to be honest, it is still not nearly enough. Our hospitals are screaming for the product," said Ersilia Lacaze with the Central California Blood Center.

As Frankie recovers, Quintana is urging those in the Central Valley to step up to save lives.

"This is our time to come together and become one and save each other, and save our future and our children," she said.