The defensive back from Modesto is the first Bulldog drafted since 2020.
KFSN
By Stephen Hicks 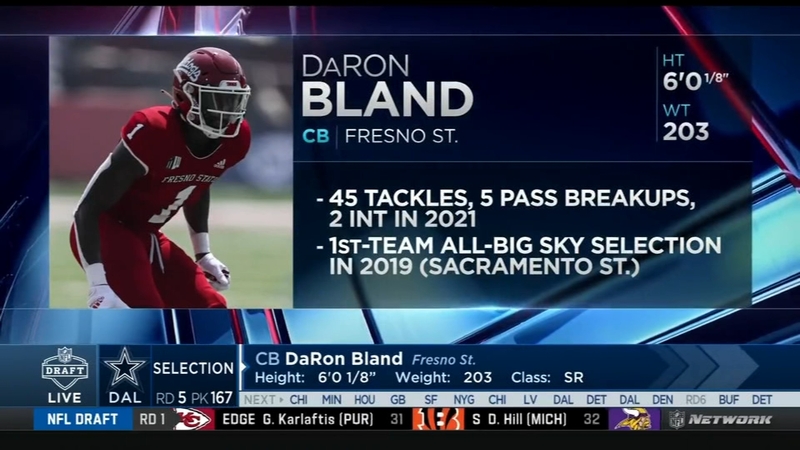 FRESNO, Calif. (KFSN) -- Former Bulldog DaRon Bland was drafted 167th overall by the Dallas Cowboys in the fifth round of the NFL Draft.

The defensive back from Modesto is the first Bulldog drafted since 2020 when offensive guard Netane Muti was selected in the 6th round by the Denver Broncos.

Eager to learn from his new teammates! ⭐️#CowboysDraft | #DallasCowboys pic.twitter.com/4oemwJC86C

Bland transferred to FS from Sacramento State in 2020.

He appeared in all 13 games with the Bulldogs his senior year, starting nine at cornerback.

He finished fifth on the team with 45 tackles (34 solo) and played in the 2022 NFLPA Collegiate Bowl.

He had two interceptions including one against Boise State that was returned 100 yards for a touchdown before a holding penalty brought the ball back.

At FS' Pro Day, he recorded the fastest 40-yard dash time running a 4.42 while also performing the highest vertical jump at 35.5 inches.