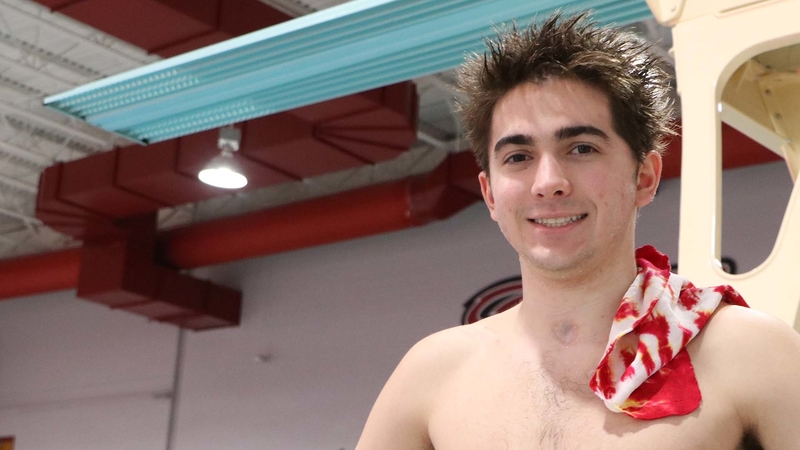 LAWRENCE TOWNSHIP, New Jersey -- As a 15-year-old, Sean Binning enjoyed diving for sport and hanging out with friends. But his life changed on March 5, 2019.

What Binning thought was a migraine turned into much worse when he collapsed. A trip to the hospital revealed that he had a ruptured brain AVM, or arteriovenous malformation. He was born with it but never knew. He was immediately sent in for emergency surgery.

"I don't remember anything until I went to the ambulance and then I woke up 18 days later," said Binning.

Three years and three brain surgeries later, Binning is back in action. But he had to rediscover the most basic parts of life before returning to the board.

"I had to learn how to walk, talk, speak because of my trach," he said. "Over time, I started getting better and better."

Binning, now an 18-year-old, left his hometown of Annandale, Virginia, to join the Rider University Men's Swimming and Diving Team. In February, he helped the team become Metro Atlantic Athletic Conference champions for the 10th time in a row.

"It's all because of my coach, my parents, my teammates just pushed me through it," said Binning. "I didn't think I would get this far. I just enjoy the sport. So I'm going to see how far I can go."

Binning may not have his sights set on a professional career in diving after college, but he does what to dive head-first into the world of neuroscience by attending medical school.

"People have been worse than me. I mean, I was happy to be alive. I didn't know if I could still live after that," he said. "But I mean, it's incredible how far I've got here and I think I can help other people."
Report a correction or typo
Related topics:
wpviall goodlocalish
LOCALISH
Moonshot Compost turns your food waste into nutrient-rich compost.
The new St. Pete Pier is the crown jewel of this Florida city
Meet the Dumpling Dudez!
Beyond June: Apparel company celebrates Pride all year
TOP STORIES
NE Fresno intersection shut down after shooting outside GB3
Gun owner personal data exposure more extensive than previously known
1 killed in house fire in Fresno's Tower District, officials say
Slow effort to ID San Antonio migrant dead, toll rises to 53
Protests against Roe v Wade ruling continue outside Fresno City Hall
Clovis police say minor shot outside Sierra Vista Mall
Rent relief eviction protections in California set to expire
Show More
Fresno man on trial, accused of murdering his girlfriend
After 18-month-old dies in hot car, dad dies by apparent suicide: P...
Man killed in crash in Tulare County, CHP says
Why you should pay down your credit cards right now
Central Unified board votes to add 2 officers to middle schools
More TOP STORIES News