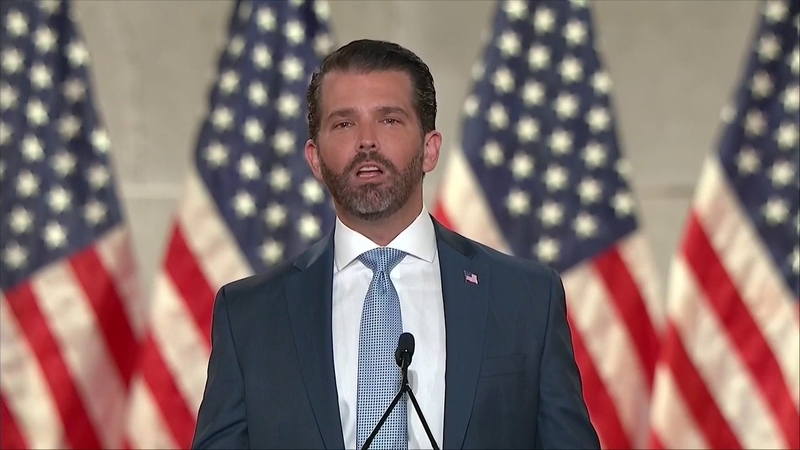 But more broadly, President Donald Trump's eldest son is painting his father's opponent for the presidency as part of a movement aimed at stripping the nation of its most basic freedoms.

"In the past, both parties believed in the goodness of America," the younger Trump says. "This time, the other party is attacking the very principles on which our nation was founded," citing freedom of thought, speech, religion and the rule of law.

Mocking Biden's past meetings with Chinese leaders as vice president, he calls the Democrat "Beijing Biden" and pokes at his decades in the Senate and previously unsuccessful presidential bids by calling him "The Loch Ness Monster of the swamp."

But the younger Trump offered a full-throated support of his father's campaign theme that protests for racial justice are lawless, violent mobs intent on toppling long-honored past leaders.

He says, "It's almost like this election is shaping up to be church, work and school versus rioting, looting and vandalism.

Trump Jr. joins a list of family members slated to speak during the convention, including the president's children Ivanka, Eric and Tiffany, wife Melania and daughter-in-law Lara.

VIDEOS: Speakers on the 1st night of the 2020 RNC
EMBED More News Videos

Kimberly Guilfoyle, Trump Jr.'s girlfriend, shared her own experience as the daughter of immigrants.

Guilfoyle, a former Fox News host, serves as the national chair of Trump Victory Finance Committee 2020, the president's reelection campaign, and is focused specifically on fundraising. She and Trump Jr. often headline fundraising events together.

"You are capable, you are qualified, you are powerful, and you have the ability to choose your life and determine your destiny," she said.