Dozens of Valley veterans take off for Washington D.C. on the 17th Central Valley Honor Flight 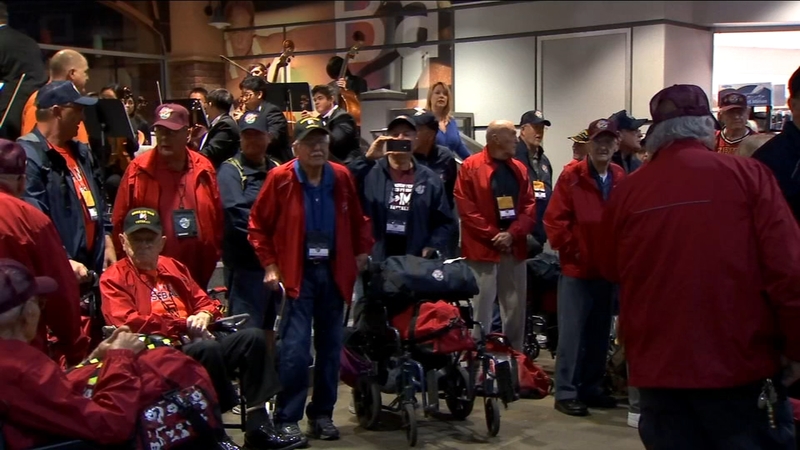 Dozens of Valley veterans take off for Washington D.C. on the 17th Central Valley Honor Flight

FRESNO, Calif. (KFSN) -- 68 Valley veterans got a heroes departure Monday morning, as they made their way through the Fresno Yosemite International Airport and onto the 17th Central Valley Honor Flight.

Their destination, Washington D.C. Veterans will visit memorials dedicated to them from the World War II to the Korean War memorial.

For some like veteran Leonard Cozby, it's the first time.

"I'm looking forward to seeing the whole thing. It'll be a great adventure for me," said Cozby.

68 Valley veterans prepare for the trip of a lifetime, as the Central Valley honor flight takes off for its final flight of the year from the Fresno Yosemite International Airport.

He fought in the Battle of the Bulge in World War II.

Cozby was captured by German forces and was prisoner for four in a half months.

"They put us out there to stop the Germans from going up and down the hill," said Cozby. "The sergeant gave me a rifle and a bazooka and told me to go down there and stop them."

For others like Dolores Brennan, it's a welcome back. She's the only female veteran on the flight. Brennan served in D.C. during World War II. There, she helped make parts for a machine that cracked the German submarine code.

"After we came through with our project we could sink more German submarines and we turned the war around," said Brennan.

Veterans from across different eras are all making the trip. Michael Betterton of Visalia served in the Korean and Vietnam Wars. He was part of the CIA.

"I was in the CIA for about a year in a half, I was part of the original U2 spy program," he said.