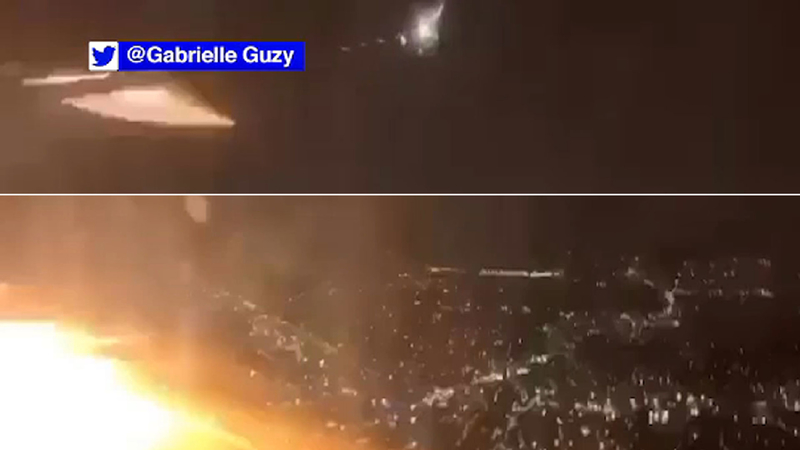 NEWARK, New Jersey -- A United Airlines flight from New Jersey to Los Angeles was forced to make an emergency landing at Newark Liberty International Airport after an apparent engine fire that was caught on camera.

Video recorded by a passenger early Thursday morning showed sparks coming from one of the jet's wings moments after takeoff.

The passenger, Gabrielle Guzy, said it appeared a fire was coming from the engine.

"The engine, it shot like 10 times, and I got about six of them on video with flames, and it sounded like gunshots, and everyone just kind of freaked out," she said. "It wasn't like a mass panic. Everyone just kind of was shocked, just looking around like does anybody know what just happened?"

The plane I was on had an engine malfunction minutes after take off 😳 pic.twitter.com/maaGiLHD24

"I didn't know what was happening," Guzy said. "My sister said she thought it was lights, but I knew it was fire from the engine. I kept reassuring myself we'd be OK because we had only been in the air for a minute."

An Orange County, California, resident who was on the flight and returning from Tel Aviv said he thought the worst.

"It was a very normal climb out, and we've been on flights hundreds of times, but right as (the pilot) was starting to seem like pull power back a little bit, there were four or five of the loudest bangs I had ever heard," the man said. "We just came from the Middle East, so you're thinking, oh man, is this an engine problem, is it a missile? Everything flashes through your mind."

He added that some passengers sitting near the engine who may have been able to see the apparent flames were screaming.

The airline released the following statement:

United 1871 from Newark, New Jersey to Los Angeles returned to Newark due to a mechanical issue. The flight landed safely and passengers deplaned normally. We are working on changing aircraft to get our customers to their destination as soon as possible.