The family of the man who was killed in a fire at the Trail's End Mobile Home Park last year has filed a wrongful death lawsuit.
KFSN
By Corin Hoggard 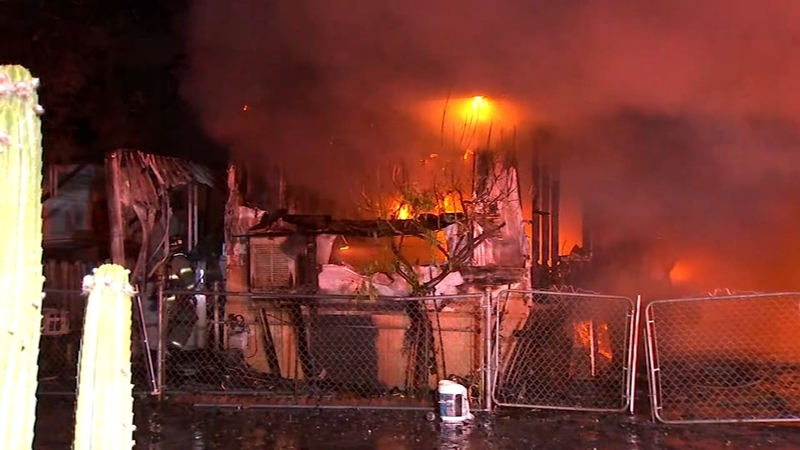 FRESNO, Calif. (KFSN) -- A new lawsuit over a deadly trailer home fire blames the park's owners as well as the city of Fresno, Fresno County, and a state agency.

"I miss him so much," Sharon Richardson said of her son, Ron, whom she lost to a fire at the Trails End Mobile Home Park in north Fresno last April.

She's now filed a wrongful death lawsuit alongside Ron's father, his son, and a friend Ron helped rescue from the fire.

"In the process of going in and out trying to pull people out of the unit, unfortunately, Mr. Richardson got trapped inside and was killed," said plaintiff's attorney Shane Hapuarachy.

He says the trailer park was a dangerous blight that should've been shut down before the fire.

The lawsuit claims the state issued several violations notices in the months before the deadly fire and the city of Fresno got at least a few complaints.

"But neither the city, the county, or the state - all of which had the authority to do so - did anything to stop what was going on in the park," Hapuarachy said.

We couldn't reach the former owners and none of the government entities had any comment on the pending litigation.

But last January, three months before the fire, the California Department of Housing and Community Development suspended the trailer park's permit to operate.

Fresno city officials told Action News in May that the state never alerted the city to have code enforcement move in.

"The simple fact is we did not know about what the environment was at that location that was contributing to the code violations," Mayor Jerry Dyer said at the time.

Legal analyst Tony Capozzi says defense attorneys might argue Richardson knew the risks when he went in to rescue people.

And even previously known fire hazards in the trailer park might not be enough to prove liability.

"Did those fire hazards cause the death of this particular person?" Capozzi asked. "That's going to be the issue."

Now almost ten months after Richardson's death, the trailer park is out of the former owner's control.

It's in the hands of a receivership with oversight by the city.

A lot less trash clutters the community and some residents tell us conditions are improving.

Everybody involved in the lawsuit is due for a case management conference at the Fresno County civil courthouse in May.