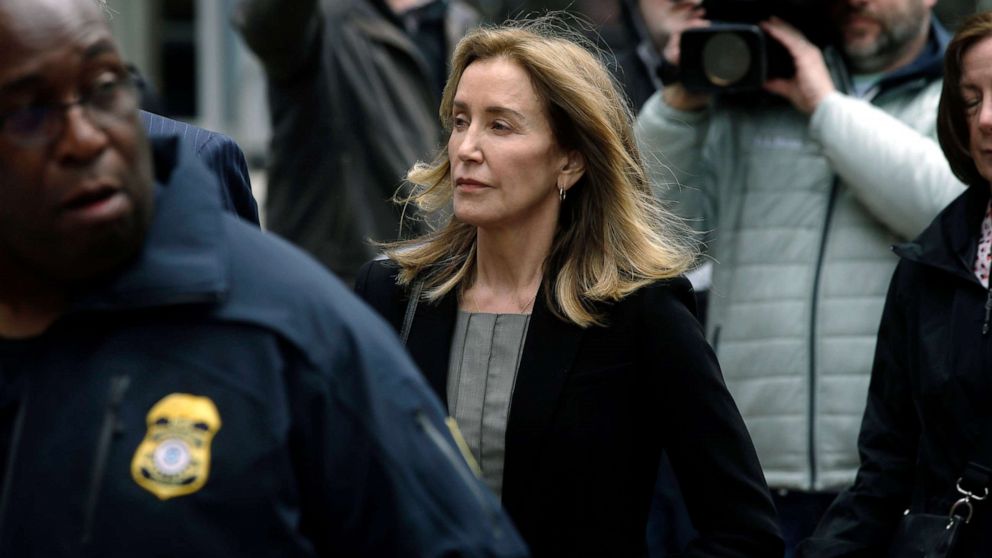 "The court should sentence Huffman to a term of one month of incarceration, followed by 12 months of supervised release and a fine of $20,000," prosecutors wrote in their sentencing memo filed Friday.

In April, Huffman was among 14 defendants to plead guilty in U.S. District Court in Boston to conspiracy to commit mail fraud and honest services mail fraud in connection with a $15,000 payment she made to have her daughter's SAT corrected.

"Huffman's conduct was deliberate and manifestly criminal: it was wrong, she knew it was wrong, and she actively participated in manipulating her daughter's guidance counselor, the testing services and the schools to which her daughter applied," prosecutors wrote.

The actress -- famous for her Academy Award-nominated role in "Transamerica" and for playing one of the main characters in the television show "Desperate Housewives" -- admitted to giving $15,000 to William "Rick" Singer, who prosecutors identified as the ringleader of the nationwide scam, "to participate in the college entrance exam cheating scheme on behalf of their oldest daughter," court documents said.

Huffman and her husband, actor William H. Macy, later allegedly made arrangements to pursue the scheme a second time, for her younger daughter, before deciding not to do so, court documents allege. Macy was not charged in the scam.

In their memo Friday, prosecutors also attacked Huffman's decision to cheat given her "movie star" wealth and status.

"Huffman also pursued this fraud despite the staggering advantages that she, and so her daughter, already enjoyed by virtue of Huffman's enormous wealth and fame. She could buy her daughter every conceivable legitimate advantage, introduce her to any number of useful personal connections, and give her a profound leg up on the competition simply because she would be applying to college as the daughter of a movie star," they said.

In court papers, prosecutors said she should serve one month behind bars and that "neither probation nor home confinement (in a large home in the Hollywood Hills with an infinity pool) would constitute meaningful punishment or deter others from committing similar crimes."

"Her efforts weren't driven by need or desperation, but by a sense of entitlement, or at least moral cluelessness, facilitated by wealth and insularity," prosecutors said.

Attorneys for Huffman, however, said in court documents Friday that, in part, "she is remorseful -- indeed, deeply ashamed about what she did."

They requested that she be punished for her crime with one year of probation and 250 hours of community service as well as a $20,000 fine. Court documents filed by her attorneys also included an emotional letter from Huffman as well as letters of support from dozens, including husband Macy and her former "Desperate Housewives" costar Eva Longoria.

No students have been charged and prosecutors said many were unaware.

Federal prosecutors also issued sentencing recommendations for other parents who are scheduled to be sentenced in the coming weeks. Prosecutors suggested some incarceration time for all of them.

Home confinement, they said in court documents, "would be a penological joke, conjuring images of defendants padding around impressive homes waiting for the end of curfew; probation with community service is too lenient and too easily co-opted for its 'PR' value; and a fine is meaningless for defendants wealthy enough to commit this crime in the first place."

Huffman faces a maximum sentence of 20 years in prison, three years of probation and a $250,000 fine, based on the prosecutors' recommendation. She is to be sentenced Sept. 13, and will be the first parent charged in the scam to be sentenced.