The embers ignited several palm trees in the area. Some neighbors could be seen on their own rooftops, hosing down their houses.
KFSN
By Nic Garcia 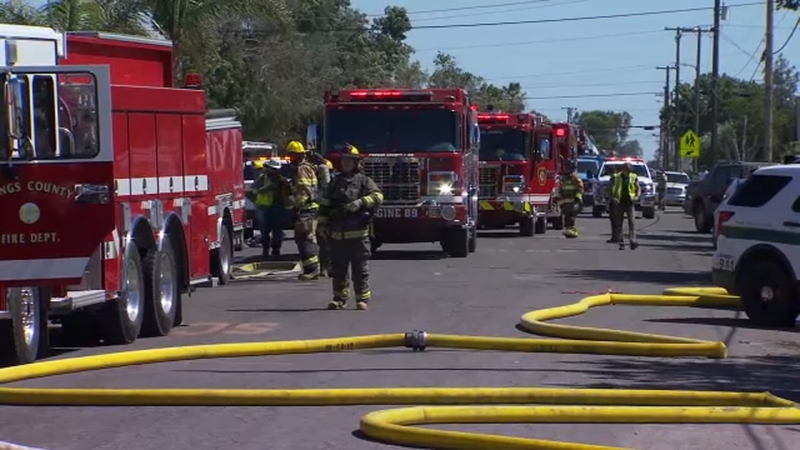 BREAKING: The @FresnoSheriff’s helicopter is overhead as crews battle a fire tearing through a building on Sherrill St. in Riverdale. @ABC30 pic.twitter.com/CCnitFOSNe

Sometime before 3 pm, there were reports of an explosion inside the apartment building on Sherrill St. near Earl St. in Riverdale.

It's right across the street from Riverdale Elementary School.

Residents had to be evacuated. The smoke could be seen for miles as crews worked to put out the flames, which burned for over an hour.

The embers ignited several palm trees in the area. Crews were quick to extinguish the tree fires and spray surrounding houses to protect them.

Riverdale & Kingsburg firefighters work to put out this fire, burning through an apartment building. Embers continue to fly into nearby palm trees. pic.twitter.com/otxAR3pRFg

Fresno County Sheriff's deputies were also on scene to help with traffic control and keep people away as crews continue to battle the flames.

Some neighbors could be seen on their own rooftops, hosing down their houses.

Action News spoke with a woman whose son lives in the building. All of his belongings burned in the fire.

"Someone said they heard a noise and then the fence started on fire and then two booms and now - a disaster," said Tonya Scott.

Sherrill Street was closed down between Shathem and Earl Streets. PG&E shut off power to the building as firefighting efforts continued.