The most popular pickup truck in America is back, now with way more batteries. Ford revealed the fully electric F-150 Lightning at an event Wednesday night, in a moment that could herald the point at which electric vehicles go truly mainstream.

An electric truck represents a great opportunity for Ford to get ahead of competitors like Tesla and Rivian, an electric vehicle startup in which Ford is a major investor. But it also represents a great challenge. Ford has spent more than a century building its reputation among pickup buyers and a poorly received entry into this market could squander that.

"Although the explosion of electric trucks in the market makes for an exciting time in the industry, it also poses a threat to automakers like Ford, which needs to stay two steps ahead of the competition in order to protect its primary source of profitability," said Jessical Caldwell, an industry analyst with Edmunds.com.

The F-150 Lightning is, in many ways, a traditional F-150 truck, except for the light bars across its front end and tailgate and the fact that it runs purely on electricity from lithium-ion batteries.

Electric motors can provide enormous power, a fact that enabled engineers to make the Lightning the most powerful F-150 Ford has offered yet. The lack of an engine also enabled designers to create a cavernous enclosed storage space, something most pickup trucks lack.

President Joe Biden took one for a quick test drive on Tuesday and declared afterward "This sucker's quick!"

With its larger optional battery pack, the Lightning will be able to produce up to 563 horsepower and 775 pound-feet of torque, a measure of pulling power. It can tow up to 10,000 pounds, according to Ford, and it will go from a full stop to 60 miles an hour in roughly 4.5 seconds. With the smaller battery pack, it will produce up to 426 horsepower, but will still pump out 775 pound-feet of torque, which is often a more important figure for work duties like towing.

The larger pack provides more horsepower and torque than the high-performance Ford F-150 Raptor truck, which is designed for high-speed off-road desert driving.

Prices for the Ford F-150 Lightning will start at just under $40,000, not including any federal and state tax incentives for electric vehicles. More luxurious versions, with features like leather seats that lay flat like a bed and a foldout desk in the cab, will cost more than $90,000. The starting price is similar to the Tesla Cybertruck although the Tesla truck, for that price, will be two-wheel drive. It's about $10,000 more than the cheapest gas-powered F-150. 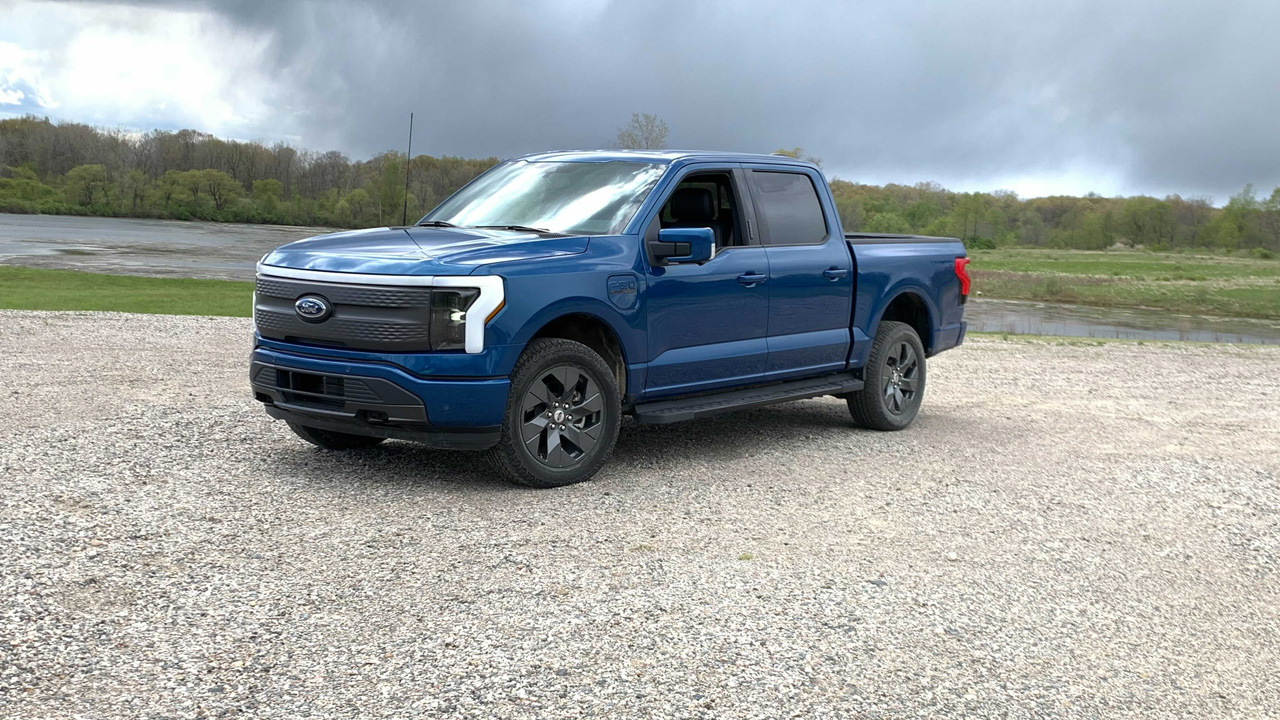 The Ford F-150 Lightning will have four-wheel-drive through its two electric motors.

Most of the body and frame of the Lightning is different from a standard gasoline- or diesel-powered F-150. But the truck is still distinctly recognizable as an F-150.

That was deliberate, Ford executives said.

Electric pickup trucks should definitely be truck-shaped, truck buyers said in focus groups with Ford researchers. Truck owners said they didn't want any weird shapes -- like the wedge-shaped Tesla Cybertruck -- that might hamper the basic functionality of a truck.

"It wasn't just our truck owners but all truck owners that wanted a truck look," said Linda Zhang, chief engineer on the Lightning.

One advantage of that traditional truck shape is that the new F-150 has a large hood area with no engine inside it. That gives the F-150 the biggest frunk -- front trunk -- in the industry, Ford boasts. The truck can carry up to 400 pounds under its hood.

Despite the resemblance to other F-150s, almost all of the Lightning's aluminum body panels, besides the roof and doors, are shaped slightly differently from the internal combustion-powered trucks for improved aerodynamics. Underneath, the truck's frame is also shaped differently from the gas-powered truck's in order to make room for the Lightning's large battery packs and electric motors.

The four-wheel-drive truck -- at least initially, Ford will not offer a two-wheel-drive version -- has an electric motor for the front wheels and another for the back.

The Lightning also has power plugs inside the frunk, including household-style plugs and USB power ports. The truck's fake grille opens along with the hood for easy access so the frunk can be used as a desk. Lights in the lid provide illumination.

It’s the smartest, most innovative F-150 Ford has ever built. And it’s all-electric.​

The Lightning has power points in the bed, as well. In all, the truck has 10 120-volt outlets and one 240-volt outlet. The electric F-150 can power a job site for three days while still having power left over for a 80 miles of driving, according to Ford. It can also power a home during a blackout. In the future, Ford plans to release software for the truck that could allow it to power a home during hours of higher electricity rates. The truck will then recharge its own batteries during the hours when power rates are lower.

Inside, the F-150 Lightning's dashboard features a large vertically-oriented center touchscreen similar to that in the Ford Mustang Mach-E electric SUV. Like the recently redesigned gas-powered F-150, the Lightning will also have a feature, called Blue Cruise, that allows drivers to completely remove their hands from the steering on some parts of major highways.

While Ford is a major investor in Rivian, a company that's also preparing to manufacture electric pickups, the Lightning does not rely on Rivian's engineering. It was designed and engineered entirely by Ford employees, executives said.

It was important to Ford engineers that the F-150 Lightning be at least as capable as a gas-powered F-150, said Zhang. The truck was put through all the same tests towing, hauling, off-road and extreme temperature tests as any other F-150, she said, and was expected to perform at least as well, if not better.

The F-150 is expected to be available in the spring of 2022. Ford will build it in a new factory on the same site as the automaker's famous Rouge complex in Dearborn, Michigan.