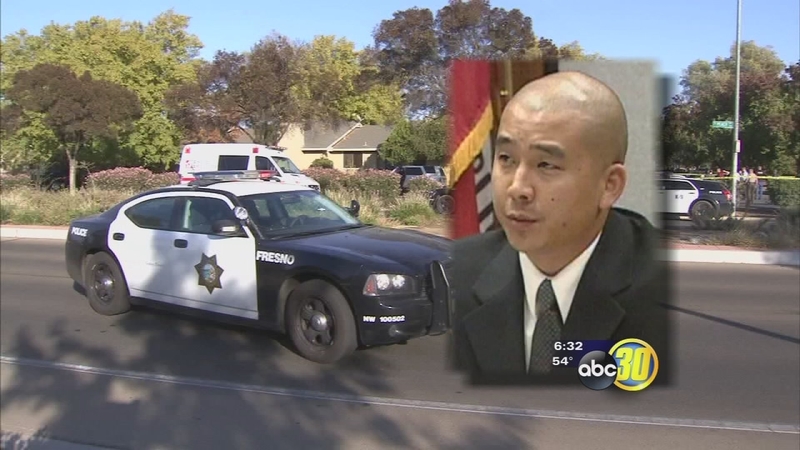 FRESNO, Calif. (KFSN) -- A former Fresno police officer will likely be heading to federal prison now that he has pled guilty to conspiracy and accepting a bribe.

Derik Kumagai, 41, walked out of Fresno's federal courthouse without saying a word, but inside, the former law enforcement officer pleaded guilty to one federal charge of conspiracy.

Kumagai's attorney, Marshall Hodgkins, said, "This is one of those situations where he committed the crime, and he's accepting his responsibility for it, and he will be sentenced for what he did."

Nearly one year ago, before his arrest, Kumagai was a 14-year veteran of the Fresno Police Department. Then, an investigation involving the FBI, DEA and Homeland Security revealed Kumagai had accepted $20,000 after bribing a jailed drug trafficking suspect to become a confidential informant. Kumagai was taken into custody and faced four federal charges including conspiracy, bribery and extortion.

Kumagai's attorney says his client has admitted full wrongdoing for his actions and now he's ready to face the punishment for his crimes. Court documents reveal he signed a plea deal on February 20. He faces up to five years in prison plus could have to pay up to $250,000.

As for Kumagai serving the full five-year sentence, Hodgkins says that's unlikely, mostly because of his honesty following his arrest. Hodgkins said, "He is admitting his responsibility for his acts, and he will receive levels off for that, but when push comes to shove, Mr. Kumagai is probably going to have to spend some time in custody."

A mistake that his attorney says tarnished his family and hurt his career. Hodgkins said, "Mr. Kumagai has already lost everything that he worked for, for the last 14 years as a police officer. It's gone. He will never be a police officer again."

Kumagai's accomplice in the crime, Saykham Somphoune, also struck a plea deal for his part in the crimes. Kumagai will learn his punishment when he's sentenced in May.