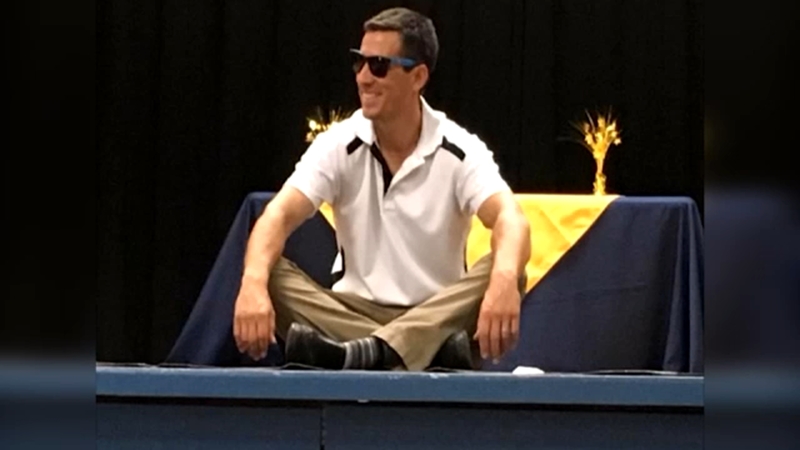 FRESNO, Calif. (KFSN) -- It has been three years since admired administrator Gavin Gladding was killed in a hit and run crash in Northeast Fresno.

Thursday, Fort Washington Elementary School, where he worked, held a special dedication ceremony in his memory.

School administrators said this was a way of continuing Mr. Gladding's legacy of building relationships at the fort.

"Today, we are here to honor the kind hearted individual Mr. Gladding was, who showed us how to have empathy and how to be a friend," said Fort Washington Elementary School Principal Melanie Hashimoto.

Hundreds of current and former students and staff came together to remember Gladding three years after his death.

Hundreds of Fort Washington Elem. students and staff have gathered three years after Vice Principal Gavin Gladding was killed in a hit and run crash. The Gladding family is also in attendance. @ABC30 pic.twitter.com/aJQEnjcl2w

"He valued relationships and the importance of reaching out to be a friend and have someone to lean on," said Hashimoto.

Gladding, a guidance instructional specialist at the school, was hit and killed while running near Friant Road and Copper Avenue in 2018. The driver, Rogelio Alvarez-Maravilla, left the scene but was later found and arrested.

He was sentenced to three years in prison, but with time credits, served just 13 months in custody.

Thursday, Gladding's family was in attendance as a special area on campus was dedicated in his memory.

Gladding's children cut the ribbon, officially opening two buddy benches installed on the back side of the school. It was a place where Mr. Gladding often watched the boys' volleyball team play and soccer team practice.

"There was no one better with kids than Gavin," said Karen Hahesy, a 3rd grade teacher at the school.

She said she and Gladding became close because they were both training for a marathon in 2018.

"Just was an awesome, awesome man and this was just his place of comfort out with the kids," says Greg Knod, a 6th grade teacher at the school.

He coached boys' volleyball and said Gladding often came out to help at practices or games.

"The thoughts of him just -- even though it's three years removed -- his spirit, he's here every day. You feel him," said Knod.