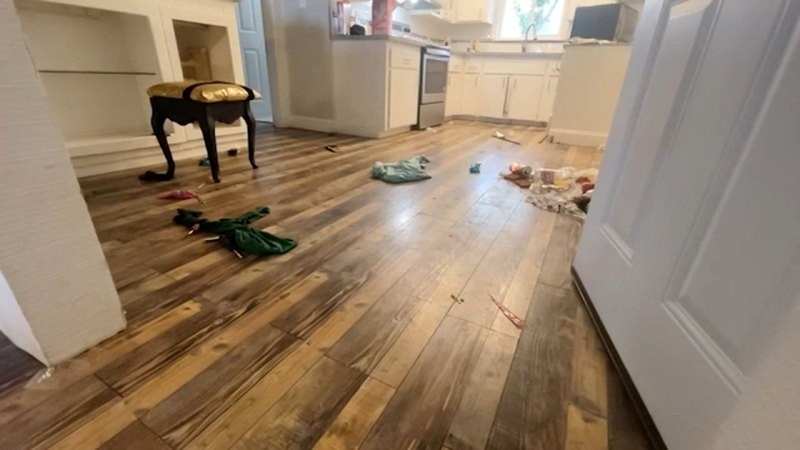 FRESNO, Calif. (KFSN) -- A Fresno family is finally taking their new home back from squatters who kept them from moving in for more than two months.

Action News first told you about the miserable move-in experience in September, but the situation took a dramatic turn Wednesday.

This dream home had turned into a nightmare.

In the backyard, you can see just a fraction of the trash left behind by the people who illegally made it their home.

But they're gone now.

Animal feces, syringes and needles, holes in the wall, a missing washer and dryer.

Elmer Morfin and his wife Karen Herrera made a mental list of the damage done to their home since they tried to finish moving in and found squatters two months ago.

"It's horrific," Morfin said. "It's like a nightmare, right? We expected the house to be in bad shape, but not in this particular shape."

The couple and their two kids - ages 3 and 8 - loved the recently remodeled home and closed escrow in mid-August.

"We had a contract with our apartments that ended that same month, so we had thought at first, 'Great, it's working out for us' and then this happened," Herrera said. "So it was like, got to get a storage unit, got to find somewhere to sleep."

Fresno police couldn't help them because a woman who took control of the home claimed to have rented the place, so the true owners also had to find an attorney.

"Unfortunately, it's all too common that we see people go to a home and claim it as their own," said Fresno County Sheriff's Office spokesman Tony Botti.

After two months in court, Morfin and Herrera won. A judge ruled the woman had no right to occupy the home.

They moved out some of their stuff, but left a mess and little in the way of an explanation.

"I have no shame," said the woman who attorneys identified as Limaris Velez. "Only God knows the truth, so I don't care at all."

One man who was part of the moving party didn't like being recorded, so he swatted the phone out of the hands of an Action News reporter.

Morfin and Herrera brought several people for the move-out, including the family members who helped them get through the last two months.

They say this day came at a large mental and financial cost, but they're ready to make the house truly their own now.

"It's such a big relief that we got it back," Herrera said. "Even though it's in this condition at the end of the day, we got it back."

A couple pieces of advice they have for new homeowners now: Move in as soon as you can and change the locks, which they did on Wednesday.