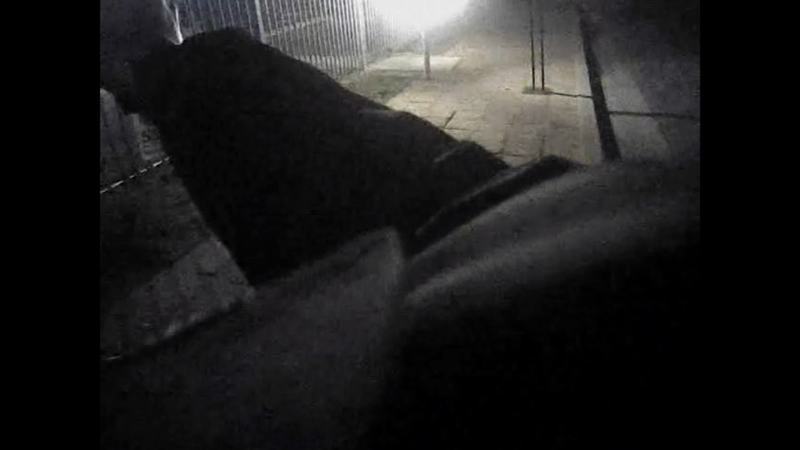 FRESNO, Calif. (KFSN) -- Action News has acquired new video and audio from a Fresno police shooting that offers a glimpse of the dangerous situations officers can experience.

The city of Fresno has turned over files from about a dozen police shootings in response to our public records request and this one includes a video showing officers in clear danger and opening fire.

New Year's 2018 got off to a dangerous start for two Fresno police officers.

"Hey, come here man," you can hear one officer tell the suspect before reporting on his radio "possibly armed."

Body camera video gives a brief glimpse of the man they found outside a central Fresno home after two reports of a burglary.

Both officers saw a weapon and acted.

At that point, he told investigators he saw the suspect point a weapon at his partner and the video shows him shooting at the man.

Those two shots hit the house, but not the suspect, and he ran inside the home. Police waited two more hours before he surrendered. Turns out, he's the one who called 911 in the first place.

"Sir what do you need the police for?" a 911 dispatcher asked.

"There's somebody trying to break into the house," said David Olivas.

Toxicology reports showed Olivas was high on meth and PCP that morning and he later told police he sometimes had hallucinations from drugs.

He acknowledged having a BB gun in his hand but denied pointing it at police officers.

The Office of Independent Review found the shooting justified.

But this is the public's first chance to see for themselves.

"I think it's important in light of transparency here to put all the facts out there and let the public decide what the facts are, but put the tape out there," said legal analyst Tony Capozzi. "I think it eventually helps the police department."

Olivas pleaded guilty to resisting arrest, having a stolen car, and drug possession and was sentenced to 3 years probation in May.