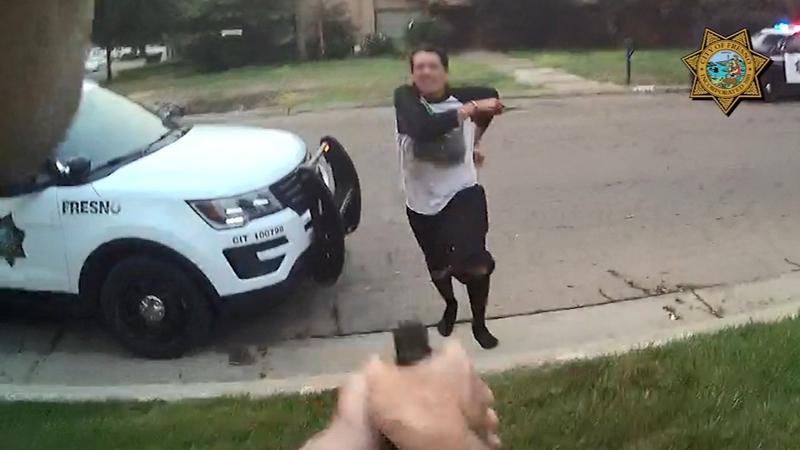 Officers say the attacker stabbed his brother in the chest, then refused to drop the weapon - and they were forced to take action.

Family members say the suspect was high on meth when he stabbed his brother.

From the moment officers pulled up to a neighborhood near Butler Avenue and Helm, they saw the problem - two brothers involved a heated argument.

But from there things got violent.

Investigators say one brother was armed with a kitchen knife and refused to drop it. Then he stabbed his brother in the chest.

That began a series of efforts to try to get him to surrender, but none worked.

Fresno Police Deputy Chief Pat Farmer says a veteran officer and trained crisis negotiator was the first to try to talk with the suspect Friday morning.

But investigators say no words were enough to talk the suspect down.

"He was doing his best to actually plead with the subject to drop the knife several times. At one point, the younger 41-year-old brother attempted to tackle his brother. At which time the older brother stabbed his younger brother in the chest," said Deputy Chief Pat Farmer.

For several minutes, officers tried to get the suspect to stop fighting and drop what appeared to be a steak or kitchen knife. But officers say he refused and started running down the street and around the neighborhood.

Another officer deployed several less lethal rounds which had no effect on the suspect. He was then tazed but investigators said that didn't stop him either.

An officer who was going to check on the stabbing victim was the last one who the suspect confronted.

The suspect refused commands again and the officer fired 4 to 5 rounds. He was struck and later died.

John Gago lives down the street. He was getting ready to do yardwork when he heard several pops.

"I heard the shots and that was it I came out to take a look and see which direction and I knew it was from that end. So that was it," said Gago.

Investigators say the suspect's family told them he was in town from the South Valley to attend a relative's funeral.

But early this morning they reported he wanted to call 911 because he believed someone was breaking into the home.

It sparked the domestic problems. Detectives say the brother who was stabbed was taken to the hospital with non life threatening injuries.

The police department is planning to release the body camera footage next week.